Posted on September 5, 2011 by Quirkworthy

I went to a wargame convention yesterday called Partizan II at nearby Kelham Hall. It’s a venerable old gent of the UK wargames calendar with many years under its belt, and at least 3 different events per year under different names and with differing foci. Partizan and Partizan II are historical, and Hammerhead mainly SF&F. 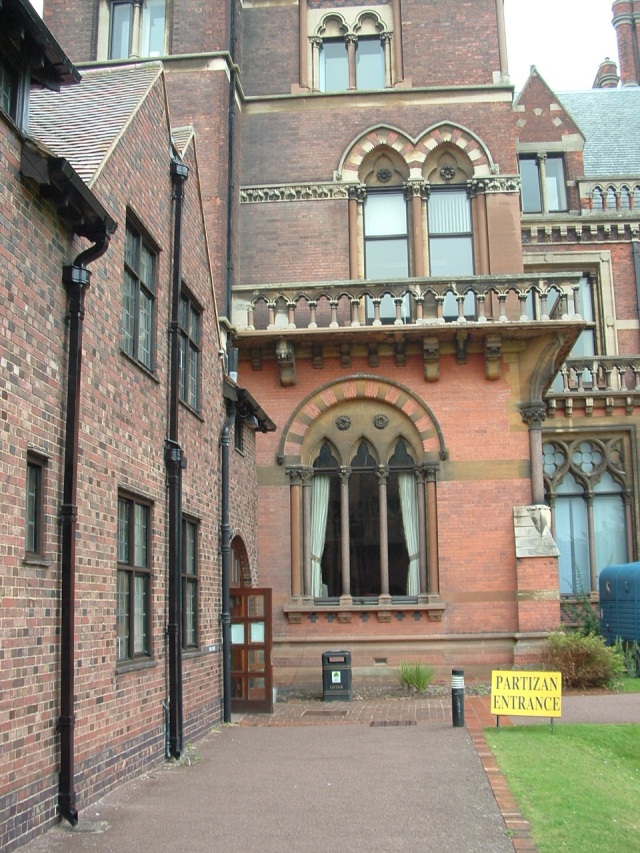 This is the entrance to the show and illustrates a little of the rather grand building it’s held in. It seems that the architect was very fond of brick arches, and made sterling use of the 3 colours of  brick that were evidently available at the time. I won’t bore you with lots of pictures of crowds; the following are to illustrate the splendid venue as much as the show itself. 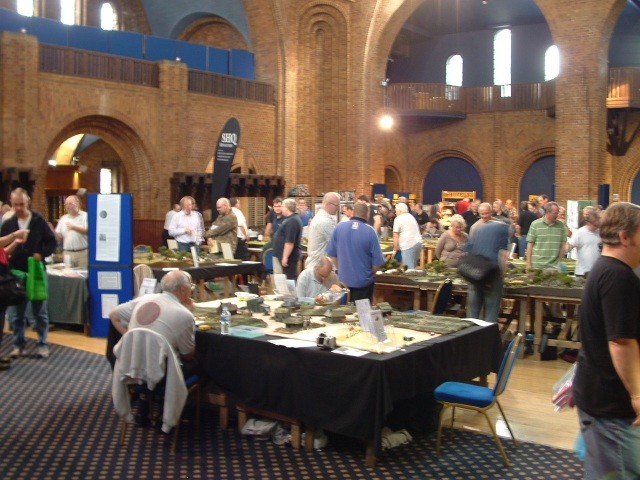 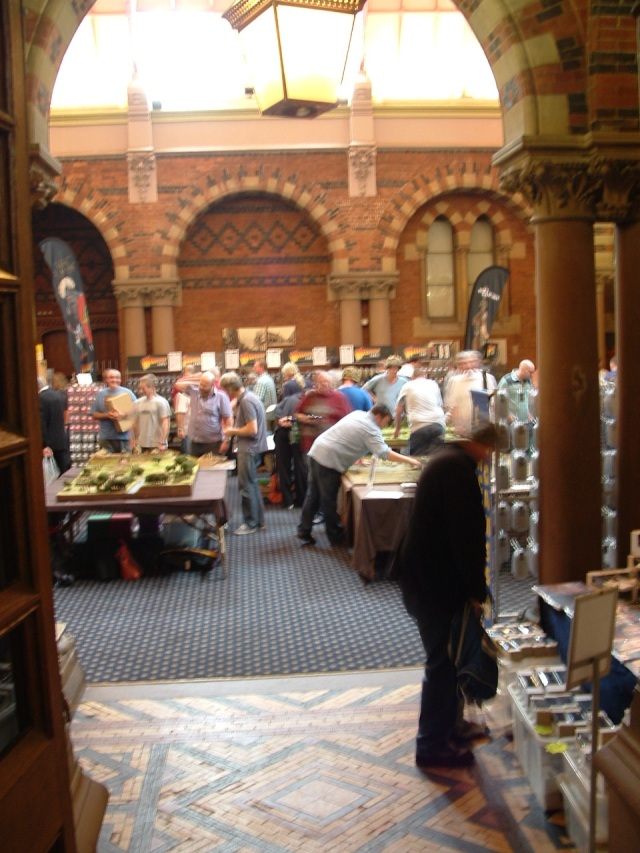 A bit of wonky camerawork there, but it serves nicely to show you some of the details of the lovely Victorian (1863) building. I’ll stop going on about it now, other than to say that it’s a nice venue, and that Kelham Hall has its own website if you fancy looking at some better pics 🙂

So what was on offer? Well, the usual mix of demonstration and participation games as well as a load of traders with models, games, books and all manner of scenery, dice and other associated gubbins. I didn’t take pictures of traders per se as you can see little but banners, and that’s dull. If you’re interested a full list is on the Partizan site. I did, however, take some photos of a few of the games that were on offer. The one that most caught my eye was a snowy WWII scrap. 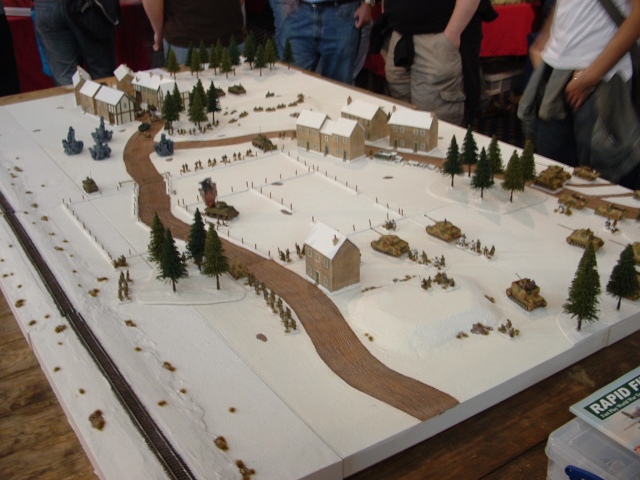 As you can see, this is a game of Rapid Fire, though I was just taken by the look of the thing. I have a real soft spot for nicely done snow battles. In the second pic you can see quite how unhappy the Americans are at this point. 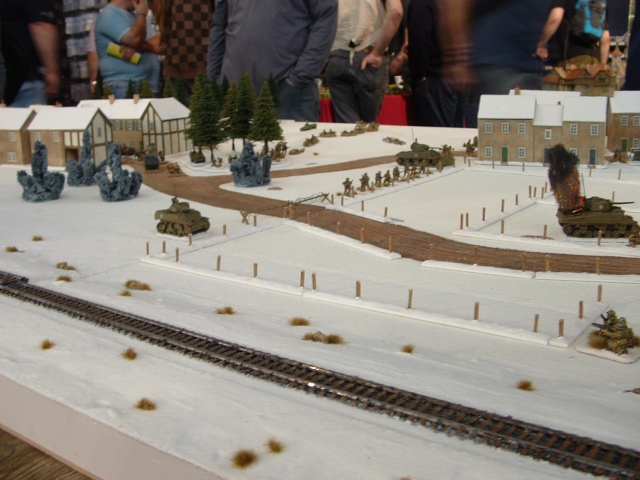 The wall of German armour is just off shot to the right. This picture shows the American forces with the “Ronson” at the right, doing what Ronsons do best. The grey plumes of a slightly overshot artillery strike on the left remind the advancing GIs that the open field they’re in could be a bad place to stop. Best keep going, eh?

Second up we have a very different game, set in much sunnier times. 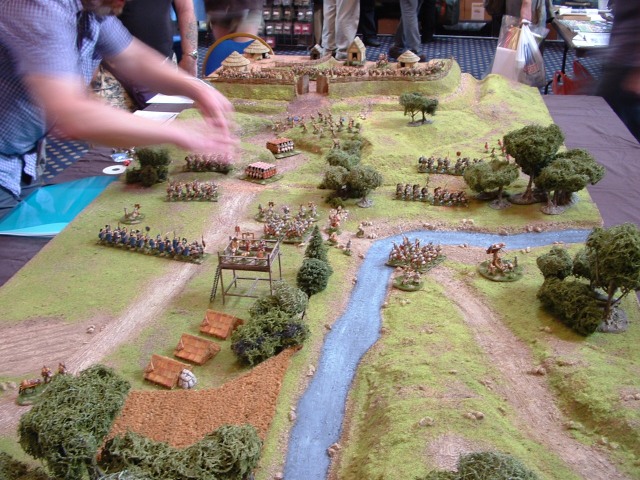 Romans in various formations advance on a Celtic hill fort. Another very attractive table. The local centurion will have them on a charge though, as the tents haven’t got even the most basic palisade round them. Call that a marching camp!

Changing tack rather, this is a tiny scale Napoleonic (I think) battle. I do like the overall look of the board as it reminds me of an aerial photograph, which I think is the right sort of reference point for this scale. You can’t really see it in the photo, but the river snaking along the far side was rather nicely made too. The only thing I thought spoiled this was the bright red tiddly winks used to mark casualties (or whatever) on the unit bases. They stand out more than I like and rather spoil the effect for me. 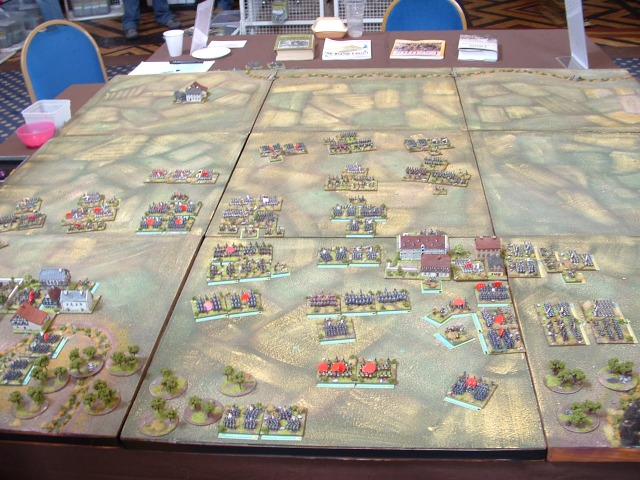 After the tiny we go back to 28mm scale, and a game with more lovely scenery (though a bit fuzzy, I’m afraid). Looks like Napoleonic wars in the Peninsular to me – note the buildings at the back. 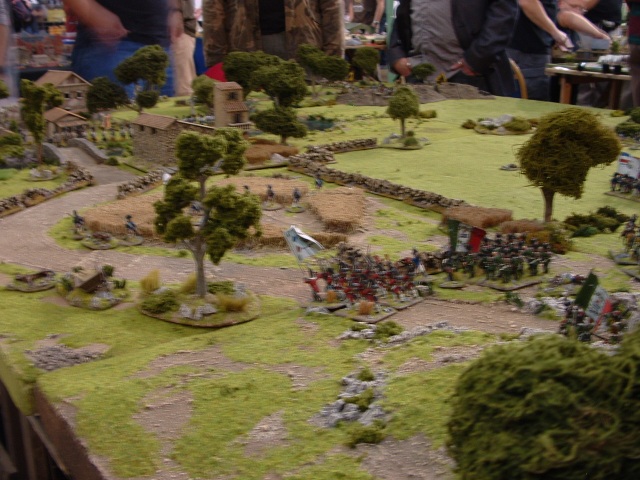 Smaller scale, bigger table and a grand sweep of battle below. The kind of thing I can’t do at home, but do feel inspired by (even if it might not actually be much fun to play). 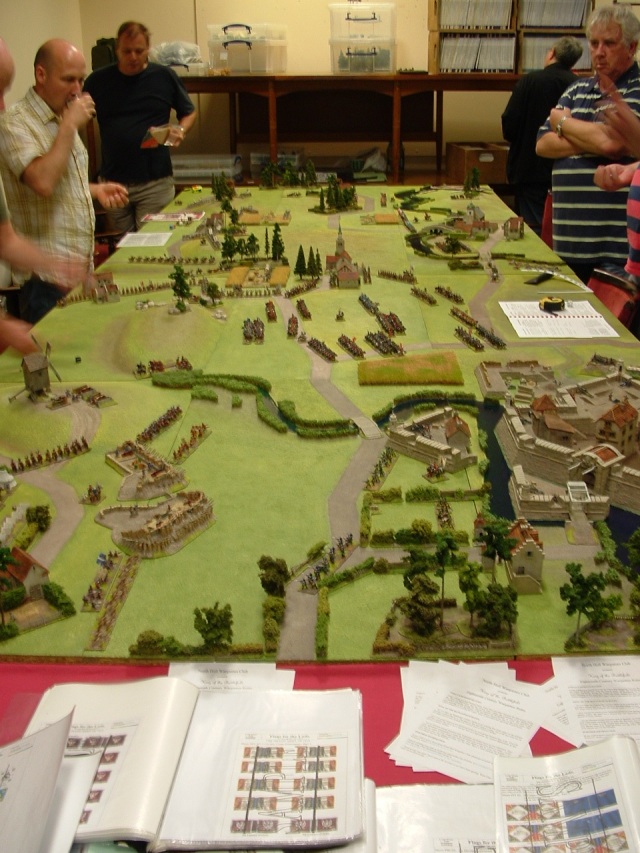 There were other, possibly even better looking games about (including a medieval one that had Dave Andrews hanging about, so me may have been responsible for the lovely town at one end), but I didn’t get good enough photos of all of them. My bad there, though your bad too for not getting out to Partizan to see for yourself 😛

Finall, the participation games deserve a mention. There was one about Bricourt that my camera didn’t like, but which looked intriguing. As this action is used as an exemplary attack at West Point it would have been interesting to play, but time was against us.  I also rather liked the idea of the Wargames Development game about WWII Soviet officers pictured below, though I didn’t play that either. Fatalities did seem exceptionally high here (which seemed to be a major point), but with NKVD in charge that was always going to be likely. 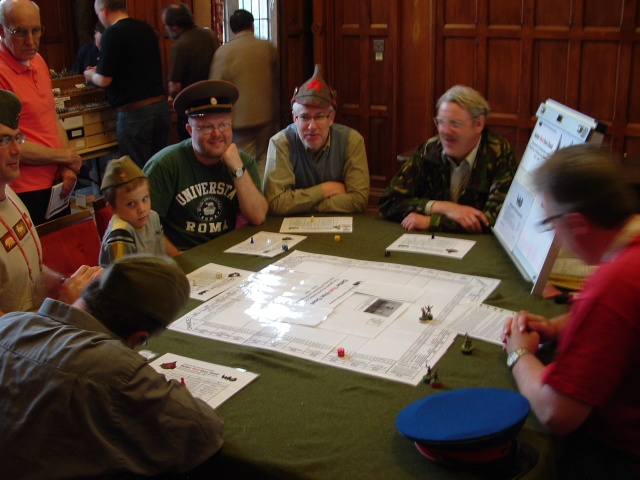 What we did get to play was The Men From Del Monte. This was a brisk little game about the B17 missions flown by a squadron of American airmen who ended up flying out of the Del Monte pineapple plantation on Mindanao in the Philippines. It was a real Boy’s Own Adventure kind of story, and a fun little game that lasted only a few minutes. I managed to sneak in low and bomb the Japanese airfield from low altitude, dodging flak as I went and returned to the base with plenty of fuel to spare. It was lucky that I took the risk to bomb from low altitude and risk the flak as my dice rolls were so rubbish that I only just managed that, but manage I did. Bob took on the Japanese fleet instead and sank almost everything they had in the Pacific, though his plane came back with more bullet holes in and less fuel so I got to pretend I’d won even though it wasn’t competitive. An amusing little game, and though it isn’t something that I’d play regularly it was exactly the right sort of silly convention game that I personally think makes events worth going to in the first place. It was, incidentally, run by the Blues Bears, who I know little about and about whom can only find this. It’s a different game from the linked article, but certainly sounds like them. A fun pair. The photo below shows Bob (on the left with the ghost behind him) being told how badly pranged his B17 got when he was silly enough to let it get bounced by Zeros on the way to the fleet. Tsk, tsk. 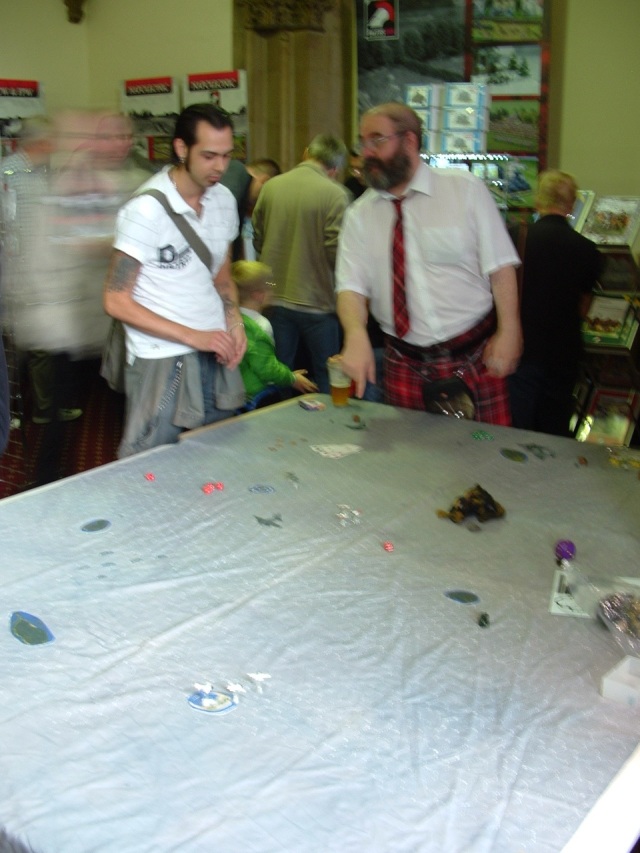 So did I buy anything? Silly question. To start with, as one of the first 500 through the door I got a free figure. The Partizan shows usually give a model away, and it’s often a little random. This was no exception as it was Mrs Wallis Simpson. Apparently the earlier Partizan figure had been King Edward, but as I didn’t go I don’t have him. 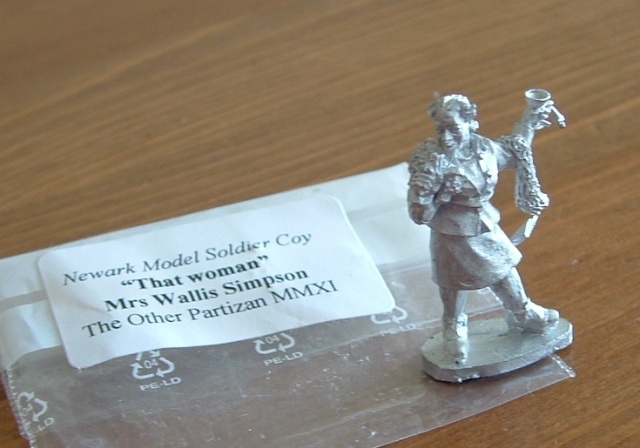 I seem to have managed only photos that make it look as if she has a goatee, which is not the case. She’s got a cigarette in a holder and a glass in one hand and something else in the other. Not sure what the something else is, but it could be gloves? A tiny pistol? I’m sure someone can tell me. It’s an OK model of the lady, though I don’t think I have an immediate use for her. Still, it’s free 🙂

The rest of my acquisitions ended up with a very distinctive theme, through no planning of my own. It’s just what caught my eye on the day. They come in two piles. First, books: 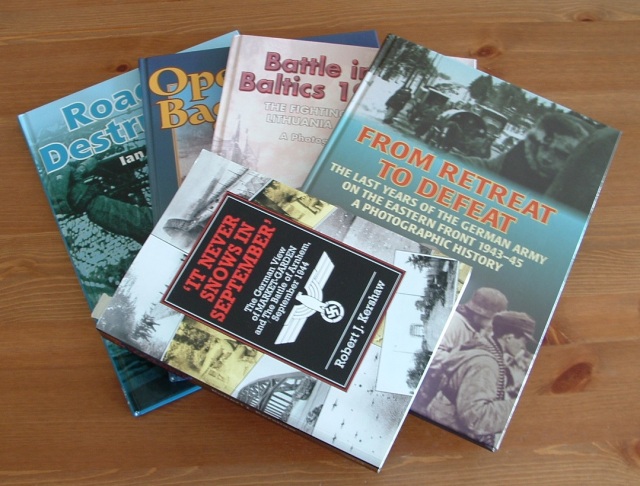 A careful selection of 5 WWII books, including the highly recommended It Never Snows in September, which has been on my list from some time. The other 4 I had not seen before, but were at a great price and are full of photos I hadn’t seen. When you have as many WWII reference books as I have, new photos have a great attraction, almost regardless of the text. Then we have the toys themselves: 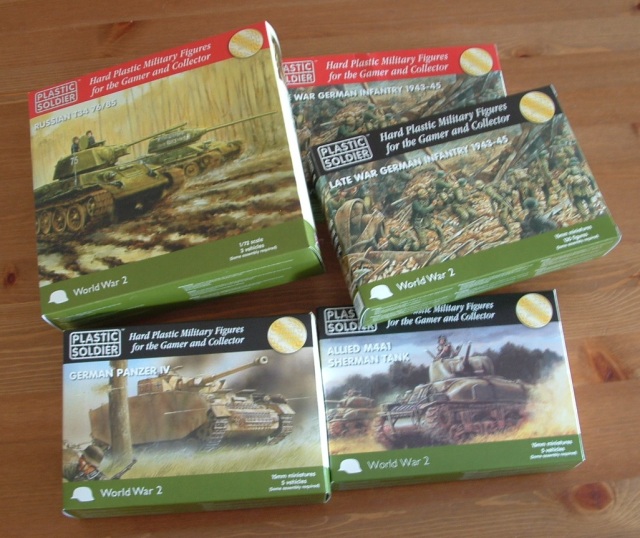 These are all from the nice chaps at the Plastic Soldier Company, who I’ve seen online before but never in the flesh. The models look very nice up close, and are a good price too. You will note my usual problem in WWII gaming in that I have 2 different scales here. A rather scatter-shot selection as I wanted to get a cross section to see what they were like rather than dive in to a single theatre. I’ll review them in due course if anyone’s interested. Helpfully, as well as writing on the boxes what scale they are, they seem to have the idiot-proof system of red for 1:7nd and black for 15mm. A cunning plan indeed.

I think the next show I’m likely to be at is the Nationals at Derby, if we can find the place. Derby has the world’s worst road network and last time we went it took twice as long to find the event as it did to get to Derby city in the first place. The real pain was we ended up driving past the old venue 3 times before we found the new one *sigh*. One of the locals we stopped to ask even told us that the one way system was abysmal, so it’s not just outsiders it foxes. Anyway, I’ll hire a native guide and see if I can get there.