Had another game of DUST Tactics last night. I really should rewrite/finish off my review as it’s a game that’s well worth exploring and nicely combines the clarity of board games with the fun of toy soldiers 🙂

There are a handful of us that have some of the models now, and we’re slowly getting organised into playing more games. One or two of the walkers have been “dry-docked” (and dismantled) while they’re painted, but there’s still enough for us to rustle up a 250 point game without much trouble. 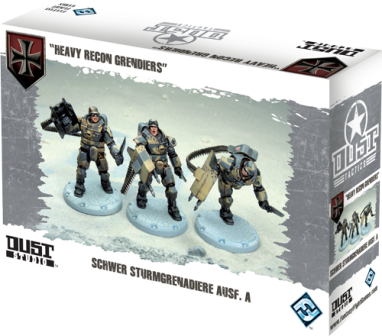 Another cool thing was that I got an early Christmas prezzie in the form of a new squad of Recon Grenadiers, who naturally had to be included in the game. Unusually for new boys to the tabletop, they actually managed to acquit themselves well – the normal curse of being new passing them by 🙂

We played the first scenario from the Seelowe supplement. I took the Germans again as Geoff’s building up his Allied forces and I don’t really mind which dies I command. Both have advantages. It started off with my guys still firing the blanks they’d loaded for the previous training mission, but they got into their stride eventually and after a pretty close middle game gradually began to get the upper hand and finally wiped out the last of the Allies at the end of turn 7 (of an 8 turn game), just in front of the objective. One of my Luther’s almost went down to a rocket punch nutter who wouldn’t die, which was amusing. He moved faster than the lumbering walker so it came down to duking it out, toe to toe.  Mind you, Luthers aren’t really built as anti-infantry machines, so it’s not really his fault that he made a bit of a meal out of stomping on one guy. Got there in the end though 😉 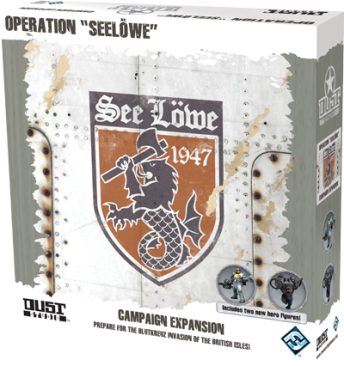 All told the objective hidden at the back of a building caused all manner of carnage as all the units ended up in very close proximity in the confined spaces, with limited time and lots of firepower to play with. Lasers, phasers and good old fashioned boomsticks left little on either side at the end.

It was a very entertaining game, and judging by the interest we’ve got among my circle of gamers there will be lots more on DUST here soon.

This entry was posted in Board Gaming, DUST. Bookmark the permalink.