Earlier, I said I was after a specific style of art for Blast ’Em! What I have in mind is the loose and sketchy sort of black and white, pen and ink illustrations that were common in the early 80s. These often looked like, and sometimes were, the product of getting aspiring rather than professional artists (often the publisher’s mates) to bash out a few pics quickly for a six-pack of beer. I even had a couple published myself in some of the multitude of fanzines that were commonplace at the time. Probably awful. Best forgotten.

I’ve always been attracted to the energy that you often find in sketchbooks, and which is often techniqued out of the final version. Of course, polished work has its place too, and for another project that’s what I’ll be after. For this Old Skool look though, I want that informal energy, coupled with the practicalities of the mono linework (to reduce the print costs – made sound financial sense at the time).

These days, this style is less in vogue (and printing in full colour is easy and relatively inexpensive). It does, however, still surface once a year in the month of Inktober. Perhaps the best example of this style in modern terms is the excellent Mr Ian McQue. He is, in fact, far more polished and professional than he should be to fit this profile, but he just feels right for this, so I’m going with him as an example.

A random page from one of Mr McQue’s sketchbooks, dragged kicking and screaming off Twitter, I think. As you can see, he has a lovely loose and whimsical style.

The cover of one of his books, as it says. He’s got 4 different volumes of sketches and other art for sale on his site (along with prints and some originals) – a fact I didn’t realise till I had a rummage today for the link. Happy I did so as I’ve now been able to order all 4.

You might ask why I’ve not gone with showing you the original art. Good question. There are several reasons, not least of which is that I can’t lay my hands on the originals today. I’ll see if I can find them before next Saturday. Oh, OK then. The internet provides…

Cover of the rulebook. This is quite a nice, dark copy. The vagaries of the cheap (often short run) printing available at the time meant that some are much more washed out than others. 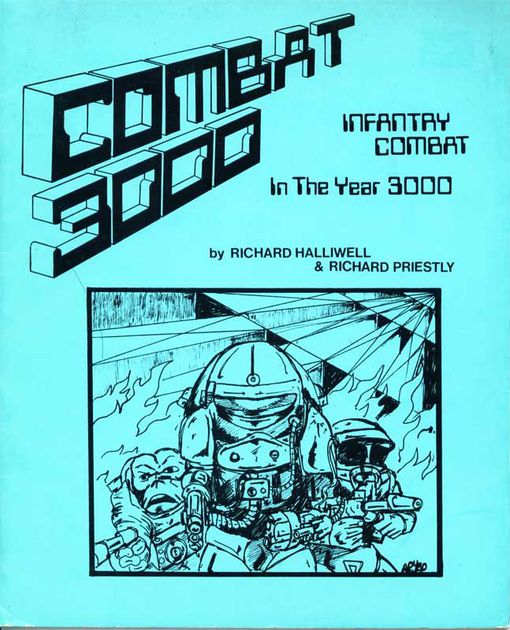 Cover of the rulebook. Can’t find decent pics of the interior stuff of this or Laserburn. I’ll take some myself when I work out what I’ve done with them.

However, as I said before, nostalgia is a funny thing, and this Old Skool vibe is about fitting with how I remember it, not necessarily how it was. And if we add a little polish along the way? Well that’s fine. It’s the feeling I’m most interested in. That was the core of the challenge, after all.

This entry was posted in Illustration. Bookmark the permalink.