Trying Out Kings of War

Posted on September 9, 2011 by Quirkworthy

Had a go at Kings of War last night. I managed to persuade Bob to give up his evening so I could get at least a vague idea what was going to happen at the weekend. I shouldn’t really say yes to going only 3 days before it starts. I’d say “that’ll teach me”, but I know it won’t… 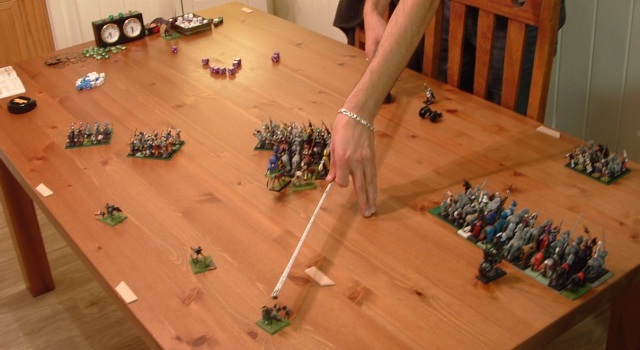 As you can see the game was all thrown together rather hastily, with several playtest armies being merged to produce a shambolic collection of models for each side, but few things were what they claimed. Liars all. The rulebook suggested playing with little terrain to start with, so I took that to the logical extreme and had none. Get the rules straight first, then worry about trees and stuff. I didn’t even bother getting the table toppers out and the grass mat as I was going for fast and dirty. This is a learning thing, not a pretty one. Speed is of the essence as I have to assemble a correct list and some models to represent it before first light tomorrow. Oops.

Note the chess clock in the background. The arms are Saint Bob’s, measuring out some artillery deviosty. 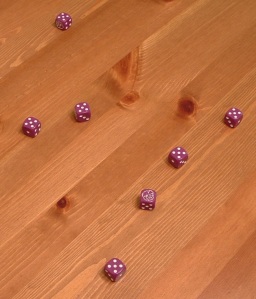 As an aside, this is a picture of Bob’s naughty Peter Pig dice. More Oink indeed. This roll is slightly atypical for them as they normally have lots more 6s (the only one that isn’t a 5 here is a 6 – it’s the PP logo). Luckly for me they ran out of batteries half way through or half the pips rubbed off. Either way, his luck was distinctly less awesome in the second half.

All in all it was a very useful practice session, and a demonstration of quite how simple the rules are. I think I’ve already got most of them in my head, and even if I haven’t then the rulebook is hardly a massive tome that will take ages to look things up in. Also, if you’ve ever played Warhammer then the similarity of concepts within the armies makes commanding the equivalent one a piece of cake.

Now, I must away to sort out some models.

This entry was posted in Events, Tabletop gaming. Bookmark the permalink.

3 Responses to Trying Out Kings of War