Some photos from today’s battles. As expected I had a worse day today; in fact, the complete flip side of yesterday’s efforts, getting wiped out (or all but) myself in every game. In my defence, my first two games were against the people who fought the final for top slot, and both of them had broken assassin based lists. The brokenness of assassins (masters of death I think is their proper name) was a major point of note over the weekend and in future events they will be fixed. The last game was against the Vanguard using cavalry horde. Apparently Vanguard (extra move forward after you deploy) wasn’t supposed to put you in a position to wipe out half of the enemy army with your heavy cavalry if you won the first turn, but as written that’s exactly what it does. It’s a risk because you have to win the dice roll for first turn, but predictably I rolled a 1 so it was less of a challenge than it might have been for him. He ended up in 4th place. Top 3 places went to assassin based lists with the Vanguard one taking 4th.

This is game 4 (against the eventual tourney winner). You will notice the lack of any troops from my army. I managed to kill one assassin.

Josh rumbled over into the corner I had set up in and butchered me in short order, assassins appearing behind units and characters and slaughtering them without a single thing I could do about it.

Bobo moving in his cavalry to slaughter mine. The unit on the left in the distance is being attacked by 4 assassins in the flank and is, predictably, unable to respond. In the centre I have advanced so we actually get fighting before his infantry wall arrives. He moves faster than I and you are allowed to pre-measure, so he won’t let me get the charge – one way or another I will get thumped, so we might as well get it over and hope I survive. I need a little luck here, but not loads. Naturally I have none at all.

Sorry, that’s not quite right. One of my army standard bearers proves perversely unkillable (on the far right), despite being repeatedly attacked by 2 assassins.

This is the last game against the Vanguarding horde. By this point he’s killed 2 of my cavalry units and I’ve destroyed one of his in return, but his flanking hero has snuck out of sight so I can do nothing but reposition so I take the next charge in the face instead of the flank. I’m just pushing things about here with no hope of actually achieving anything. In a practical sense it was all over when I lost the roll for the first turn. 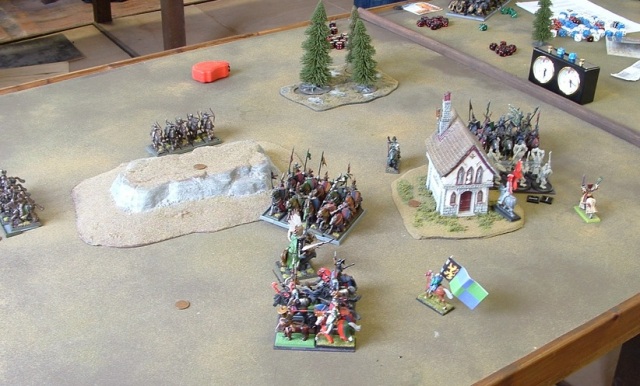 Meanwhile, the “final” was being played out. Although the tournament doesn’t have a final as such, if Bobo won this game he would win the whole thing, and if Josh got at least a draw then he would be in top place. There are 7 assassins in total on the table here.

Bobo (on the right) has deployed with his back to the table edge so that Josh’s assassins can’t turn up behind him. Bobo’s own assassins are behind the ruined archway things in front of the chess clock at the edge of the board. Here’s the view from the other side at the same time.

Bobo’s line looks really dramatic in this formation. You’ll note that this is a rich man’s game with pound coins as objective markers 🙂

A few turns later the situation is getting very messy. Josh’s assassins are munching through Bobo’s line of foot troops, but Josh has lost his vampire knights and Bobo’s cavalry and assassins are in amongst Josh’s troops.

The final dissolved into a slogging match that was fairly evenly matched and very bloody. In the end it was a draw with little left on the table from either side.

The tournament was designed to iron out the wrinkles in the system so that when they run larger ones for paying customers it all goes smoothly. As such it was a success, but for me personally I can’t say the games were inspiring. I met some great folk, it’s just the rules got in the way of the games being as pleasant as the company. On the first day I slaughtered people whose armies simply could not cope with the slightly broken list I had. On the second day I was obliterated in turn by the majorly broken lists my opponents had. Landslides either way are rarely the best of games. What I really want to play is something with a bit of to and fro, where things might go either way and you feel like your efforts make a real difference. The best game in this respect was the one against the Elf missile line on day 1, where I got enveloped by enemy units, failed to break one of them on the charge and almost got swamped. In the end I wiped him out, but before the end of turn 3 you wouldn’t have guessed that would be the result, and it certainly didn’t feel like it at the time. On day 2 I don’t think any of my actions in any of the games was ever going to win me a game against the weight of the rules.

Having played 6 games this weekend and one last week, I’ll be writing a review of the Kings of War game soon, while it’s still fresh. Look out for that in the next couple of days.

This entry was posted in Events, Tabletop gaming. Bookmark the permalink.