I was going to talk about the rest of the Foundry Open Day today, but I’d forgotten that it was GW’s unveiling of their latest one-shot boxed game: Dreadfleet. I’ll finish the Open Day report tomorrow.

There’s a predictably large amount of fuss on the web about this, which seems a little surprising as this was all entirely foreseeable. Admittedly, I knew it was going to be a Warhammer naval game ages ago, before it was common knowledge, but that’s not the issue. Folk seem surprised that this is a once off, limited edition, stand-alone piece. Why?

GW are (and have been) ramping up for the Hobbit game and all the support that will require. They have 3 core games, and that’s more than enough for them. Over the years it has been made plain to all but the most obtuse gamer that the specialist games of yore are far from the hearts and accounts of the current GW shareholders. If they hadn’t been made already they would not be invented now. They are only still available at all as it’s just as easy to leave them as it is to bin them, and for the amount of effort they put into them (nil) they turn a fair profit (more than nil).

GW’s retail chain can’t cope with effectively selling any more than 3 core games, and at time struggles with that many (look at the doldrums that LOTR is in and the sterling effort GW are putting into revitalising WFB). There is no reason for GW to launch something else that will require a continued investment. Far simpler is this model. Spend two years behind the scenes, secretly working away on a cool one-off, standalone box of goodies. Release it with little warning, knowing that it will almost guarantee to sell out. The lack of advance warning is probably as much to protect their own staff from losing focus on selling core games as it is to keep the customers spending on their normal core purchases and regarding this as an extra. It is also conveniently timed so that it isn’t a Christmas present. It’s too early. They’ll still reap the benefit of all the Christmas money.

This is just extra cash.

And money is what it’s all about when you have shareholders. Not the game, not the worlds, not the customers (though these are all a means to an end): but the bottom line. It’s just the way business is, and in these economically apocalyptic times a big fat injection of cash is very welcome, thank you. 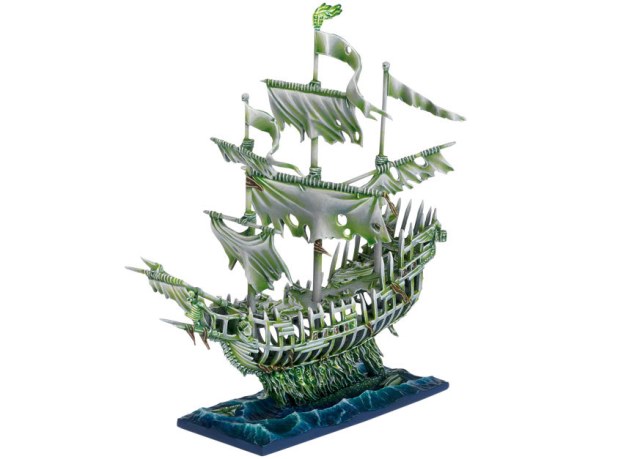 So why should anyone be surprised or amazed? It’s only because of GW ‘s size (economies of scale) and fanbase (guaranteed market) that it is possible, but if smaller companies could do it would they all ignore the obvious advantages? I doubt it. And knowing GW’s size and fanbase how could the folk out there in internetland not see it? Looked obvious to me. The only plausible alternative model was the Mighty Empires one, and that looks like more effort for less money, so it was never likely.

Of course, none of this would stop them doing Man o’ War again if they wanted to (which they won’t). But if…

This entry was posted in Board Gaming, Random Thoughts. Bookmark the permalink.

80 Responses to Dreadfleet – Feared Cash Cow of the High Seas