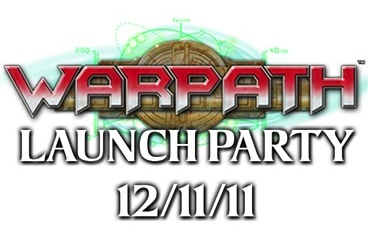 Well I was intending to do a proper event report on Mantic’s Warpath Launch Party, but my camera decided to die, so no pictures from me, I’m afraid 😦

However, there were a number of more technically savvy folk about who were snapping away merrily and have photos on their blogs, including the official Mantic piccies, the not even slightly odd Ninjabread, and (soon) tearsofenvy.

Mantic are getting increasingly organised about these events, and this one had several demo games of Warpath running all day. If you’d been there, you could have played. There were also model displays, artists and sculptors to talk to, painting clinics with Golem Studios, seminars with Ronnie and Alessio and, of course, the Secret Room with all the upcoming goodies in.

It was an interesting day for me, talking to people about Dwarf King’s Hold even though it was really supposed to be a Warpath day. I’d deliberately not set a game up so that it wouldn’t clash, but people wanted to know and it’d have been rude not to explain. I also met a nice French fellow who rejoices in the name Léonidas and happens to run Ravage magazine which, if you don’t know, is an independent French gaming magazine. Interestingly, they’ve just announced that they’re going to be doing an English version soon (in partnership with Coolminiornot, if my schoolboy French is right). This is cool as they have printed a number of things I wanted to read & play in the past, and my French generally won’t cut it when it comes to gaming jargon. For example, the copy I have to hand has a new scenario for DUST and an article on (I think) organising leagues for SMOG. Looking forward to getting it in English 🙂