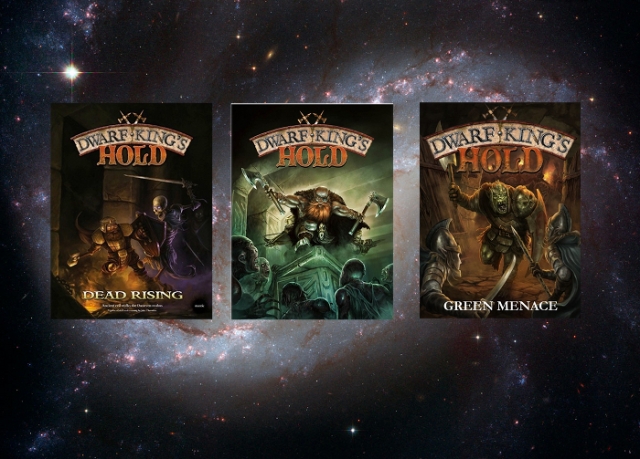 As some of you will have guessed, the Corporation figures I’ve been playing with are for the current “Dwarf King’s Hold in Space” project I’m working on. It now has a much better name than that: Project Pandora. That’s the series title anyway (at least, I hope there will be a series of them). I’ve started with the same sort of assumptions as I did for DKH: make a single, standalone game, but build into the framework the possibilities of expanding it to include other races, other environments, and so on. That way, if Ronnie decides not to do another (which would plainly be crazy) then it’s still fine as a game on its own. On the other hand, if/when everyone clamours for more then the “more” has a chance to dovetail properly. Nothing so disappointing as an expansion that feels like a rushed collection of floor sweepings. With that in mind, I’ve been roughing out other races and so on while I do the core rules and the stats for what we’re putting in this initial box. By the way, this one is currently entitled Grim Cargo. It’s had a couple of names so far, but that’s my current fave 🙂

So, what can I tell you about Project Pandora: Grim Cargo? Not lots, so far. It’s currently slated for release early next year, and is a 2 player game set in the chilly darkness of space. The box will have some very nice Mantic models in (including some of those tasty Corporation chaps I mentioned earlier). The enemies of the Corporation will be the mysterious 8th race, of which we are not allowed to speak 😉

As the design isn’t entirely stable yet I don’t want to go into too many specifics just yet. All I’ll say is that it’s shaping up pretty nicely.

Oh, one final thought. For those of you that think this will just be the same thing as DKH with a silver Lycra jumpsuit on, think again. I have currently decided to retain the core dice mechanic of the DKH series, but not because I’m being lazy. It’s actually more work to retain it than it is to start again, but I think that there is a value to keeping a “Mantic Style”, as it were. Players use tokens too, though they work very, very differently from DKH. THinking about it, about the only similarity is that there are tokens and they let you do stuff. The rest is new. I’ve gone back to basics and started from scratch because SF skirmish is not just a dungeon bash with guns. It’s a fundamentally different process and deserves to be modelled as such. There’s nothing wrong with DKH, it’s just that it models a different reality.

But I’m rambling. When I’ve got more to say then I’ll be back. So watch this space 🙂

This entry was posted in Board Gaming, Project Pandora. Bookmark the permalink.