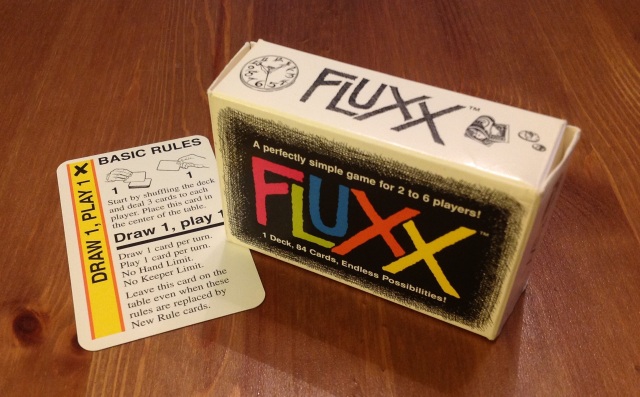 Fluxx is a strange little card game designed by the delightfully named Andrew Looney. No, I’m not joking. The copy I have is a 1998 edition published by Iron Crown and it’s this version I’ll be describing. The current edition is available from Andrew’s own Looney Labs.

The game itself comes as a single 84 card deck. The rules are simplicity itself: draw one card then play one card. Not much of a game you might say. However, some of the cards you play will change the number of cards you draw, may (or must) play, can keep in front of you and, importantly, what the victory conditions are.

Let me explain a little more.

There are four kinds of cards in the deck: 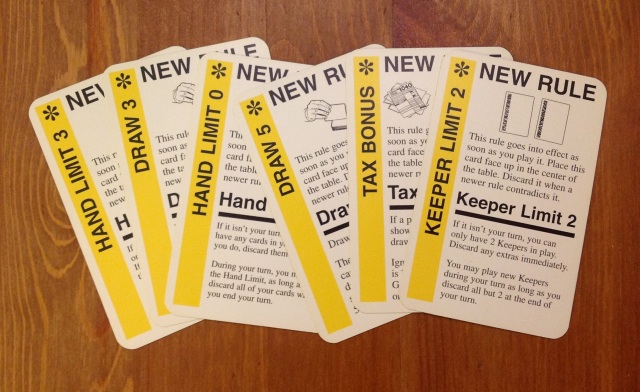 Rules: starting rules and new ones. Playing new ones change the rules immediately. 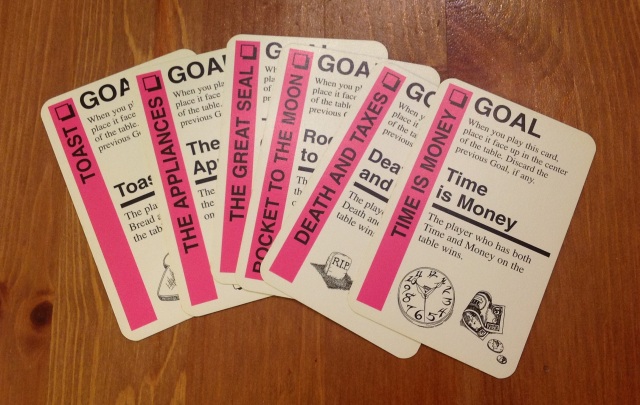 Goals: that define what you need to do to win. The last one to be played overwrites the previous one. Only one is in play at a time. 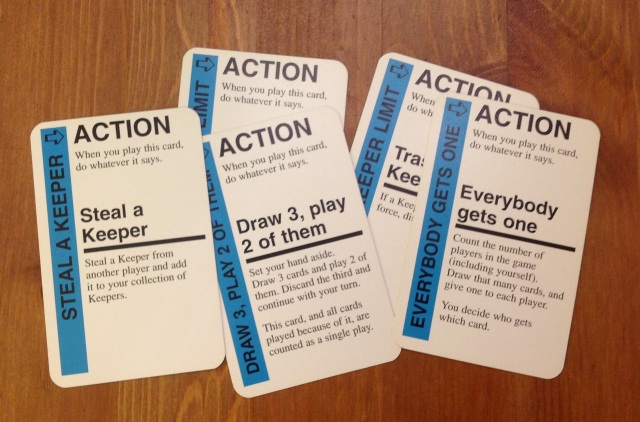 Actions: do whatever they say, such as take a card form the discard pile, trash a new rule, etc. 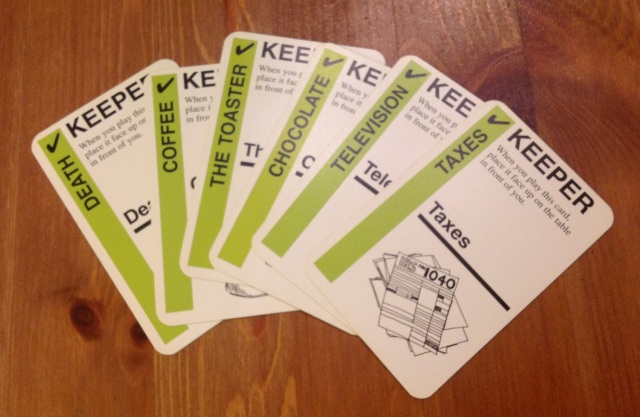 Keepers: are things like chocolate, TV or love. Most of the goals are to do with collecting specified sets of these.

You start off with the basic rule cards showing in the centre of the play area. Each player takes turns doing whatever the rules are at that point, say draw one card and play one card. However, many of the cards he plays will change the rules. For example, if he played a draw 2 cards new rule and had only drawn 1 at the start of his turn he would immediately have to draw a second (or he’d be breaking the rules).

As new rules are played they overwrite old ones which are discarded. As new goals are played old ones disappear. You go round the players, doing what the rules say when it comes to your go, until someone wins.

That, in effect, is the whole game. There’s a bit more to it because you have to follow the instructions on action and goal cards, but that’s about it.

Fluxx is, as the name may suggest, immensely random. Not only is there the randomness of card draws, but the rules change constantly making planning almost impossible. This also means that there is nothing much to do while you wait for your turn as you can’t guess what the rules might be when it comes round again. Happily, the game tends to be short (though this is also very variable).

Winning the game is often more luck than planning, and it is not uncommon for someone to either win because of other player’s actions, or be placed in a position where they can win because of them (rather than something they’ve done themselves).

The game can get itself stuck in backwaters where you have no choice about what you play, or perhaps all you can decide is the order you play things (so what the final rule or goal might be). The game, in effect, plays itself some of the time, which isn’t much fun. I’ve even played games where it won while it was busy playing itself.

A final gripe might be the lack of theme, or at least the mundanity of what theme there is. The only things mentioned are everyday items and concepts and add little to the game. personally I like a stronger theme, but this is a matter of taste and it’s not something that the game is sold on the back of.

The whole idea of a game whose rules change massively as it progresses is an intriguing one. That is fun to watch, and on the occasions when you can manipulate things to your advantage with skill then it can be very rewarding. These occasions are sadly rare.

For all its mutability the game is clear and straightforward to play. As long as the constant change doesn’t throw you, there are few if any rules queries to worry about. In that sense the design is very clean.

For me, Fluxx is more of a curiosity and design exercise than it is a real game. I take it out to play with people who haven’t tried it before as a curio, not as a good game. Having played it, folk seldom ask to play it again over other games of similar complexity and speed.

Having said that, I do play it with everyone I game with as I think that it’s such a fun idea that every gamer should try it at least once. Not only that, but it’s quick to do so and you can use it as a filler to round out a session. If it was a long-winded game it would have gone on Ebay long since.

I expect that I’ve sounded all negative so far, but in reality it is a game that has much to ponder from a designer’s point of view. Fluxx is something that I think any game designer ought to at least have a couple of goes at because it’s such an oddment. In game terms it’s a bit like those buildings with all the plumbing on the outside: it’s workings are all on show. This allows you to examine all manner of assumptions and norms, which it clearly romps all over in its quest for mutability. Personally I always feel like I should be taking more from it in terms of conceptual thinking, and am somehow failing to grasp something fundamental that it’s telling me. Perhaps that’s just me.

So even if it fails as a fun game it succeeds in provoking thought and discussion every time, and that on its own is worth the price for me.

This entry was posted in Board Gaming, Review. Bookmark the permalink.