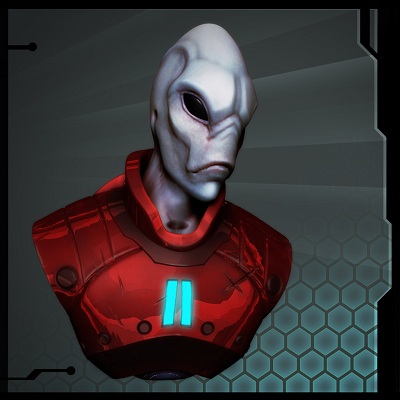 There are two teams which have grown out of my initial idea for a single MVP, and the Judwan are the first to be released. From day one they’ve been an experiment in the extreme end of what’s possible for DreadBall teams – because they have nothing but Strikers.

In theory, you could balance the Striker-Jack-Guard mix a number of ways, but in reality it is more limited. You cannot have an all Guard team because you need to be able to strike. You can, however, have a team with no Strikers as the Marauders show. I was interested in whether it was possible to do a team without any ability to Slam – an even more extreme version of the Veer-myn if you will. At least in theory Slams aren’t required to win, though you can see how you might end up in a little trouble… 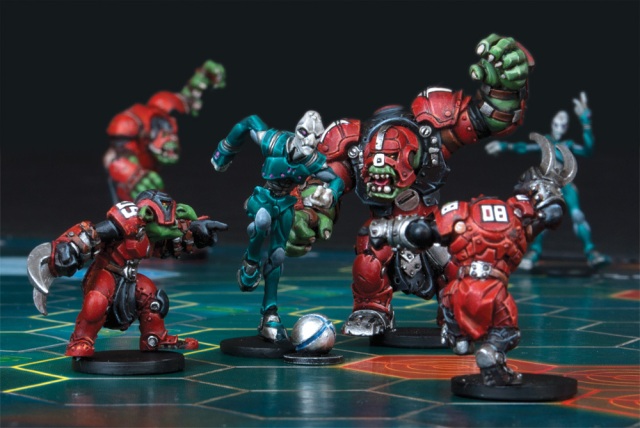 Now obviously if a team only does one thing it’s going to have to be pretty good at that, but simply upping their stats didn’t seem very interesting to me. Instead the Judwan have accumulated a number of unique abilities that define them in game terms. Firstly, they are Pacifists. That means no deliberately harming opponents. Now that’s reasonably easy to avoid when you can’t Slam, but it also means you can’t Throw the ball at them either.

As well as having an unusual mental outlook, the Judwan are also physically different from most players, and don’t actually use a DreadBall glove (thanks to special dispensation from the DGB). Instead they are so skilled that they can Throw and catch the ball with their bare hands, a feat which would usually remove a finger or three. This actually means that they can Throw the ball further than normal because the inbuilt limiters of the DreadBall gloves aren’t present, and the reflex training of the Judwan’s art of Mu’shen’wan allows them to position themselves more accurately than other players. In game terms, this means that their range bands are 4 hexes long rather than 3. To balance this, they cannot score bonus points.

During playtesting, the Judwan worked well enough from the start in terms of scoring and winning matches. Despite this, they just weren’t enough fun. Playing with and against them was simply not engaging enough. Eventually people also worked out ways to block them into corners from which they couldn’t escape because they had no Slams and no ability to move their opponents about or break holes in lines. I toyed briefly with giving them all Jump, but even that didn’t quite fix the issues of positional play, nor did it make them much more fun to play. I was repeatedly asked to give them the ability to Slam, but I resisted. Adding Slam to a Striker breaks one of the core principles of DreadBall and would have opened the gates for fudging the whole clean system that differentiates between the player roles. It was tempting to use it to fix this one problem, but it would have broken the balance and clarity of the whole design, so I said no.

Instead, I came up with a new ability called Misdirect which was another manifestation of their art of Mu’shen’wan. This means that it fitted perfectly with their background and Pacifist stance, whilst also giving them the ability to move opposing players about. It incidentally made them much more interesting to play and gave them a whole new set of options on the pitch. This is the version you’ll see in Season 2.

What Misdirect does is to allow you a new type of action called Feint. A player using this action rolls off against an opponent in a similar way to a Slam, but if they win they will turn or move their opponent (depending on how well they do) without harming them. This gives the Judwan the skills they need to move through and past opposition without any unpleasantries, and makes it impossible to block them into a corner. This solved the problems that playtesting had shown, making them both more competitive and loads more fun for both Coaches in one change – and still no Slam.

On the pitch they do take a big mental shift to deal with as they simply cannot remove their opponents. Instead you play a game of DreadBall almost as if your opponent isn’t there. As with all the Season 2 teams they make both sides think a bit differently and perhaps a little harder, thus raising the whole game to the next level. I hope you like them.

The picture at the top left was made by a DreadBall fan called Stephane Rabattu and is a great example of the brilliant stuff that has been done by the DB community. Loads better than I can do with my crayons 😉

This entry was posted in DreadBall - The Futuristic Sports Game, Game Design Theory. Bookmark the permalink.