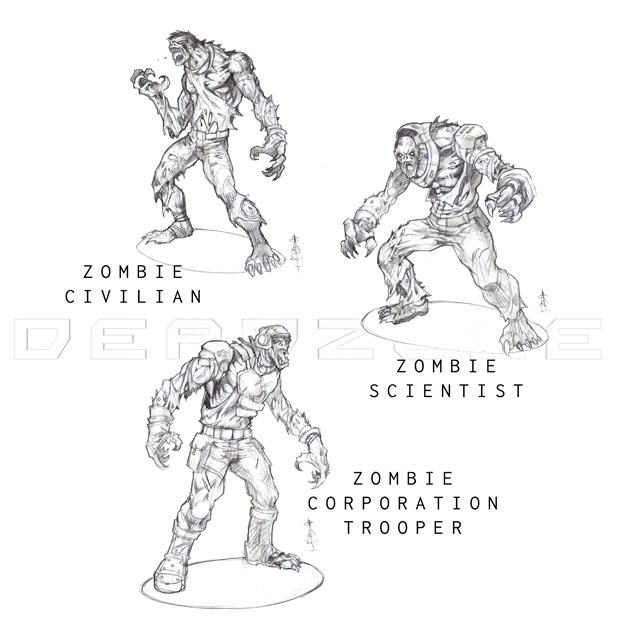 The zombies are coming.

As if Deadzone wasn’t a dangerous enough place already, it looks like there’s a zombie infestation too. That’s really going to drop the property values.

Don’t worry though, they’re not at all smart and can easily be killed by ranged weapons. Assuming, of course, that you have enough time to get them all before they arrive at your position and start eating you. Still, it could be worse. There could be dozens of them. Oh, wait…

Zombies in Deadzone aren’t your traditional animated corpses. Really they should be called “zombies” because that’s just a nickname. However, they behave so similarly to the monsters from the old fashioned horror vids that most Corporation citizens wouldn’t argue about the niceties of the details. They shamble about in the tattered remains of their clothing, drooling, raving and attacking people (then eating them). Zombies seems pretty fair.

What they really are is the in-betweenies of the Plague infections. When Stage 2 Plague beasts fail to kill their victims outright then the survivors are usually infected anyway. Many more of them will die from this mutagen – the transformation is not kind. The “lucky” ones will survive the change to become Stage 3 Plague creatures and will romp off to join the merry band of mutants, ransacking the burning remnants of the civilisation they helped to build. Those that do not die, but fail to entirely survive the transformation, are left with pain, fury and mush for brains. These are the “zombies”.

They are far too stupid to be commanded in battle in any normal fashion and will merrily attack anyone from any faction. For this reason they are just as much trouble for the Plague that spawned them as for the Enforcers or Forge Fathers.

I’ve not finalised the rules yet, but the general idea is to have them bimble about the battlefield in large numbers, causing trouble for both sides. It’s an AI system, but given that the zombies have only the barest minimum of “I” in the first place the simplified version in the game won’t be terribly smart. And that suits them just perfectly 🙂

What is particularly good news about these zombies (apart from the cool rules and campaign) is the new models being planned. The concepts at the top of this page are what Mantic are aiming for, and I think they look pretty good. They will be moulded in hard plastic rather than resin-plastic, which is also good (it’s my favourite modelling medium), and the plan is to make them so that they are interchangeable with the existing Mantic zombies and ghouls from the Kings of War range. By mixing and matching between these sprues you’ll be able to build a great mix of poses and gear for a really shambolic and random zombie horde.