Back from today’s playtest day at Mantic HQ. It was a healthy mixture of both laughter and deep discussion which made for a very entertaining and useful session. The teams are looking very good and each has its own character and tactical challenge as you will see shortly. I won’t tease you with more details as you’ll have the proper rules for each soon enough. What I will tease a bit is the multi-player game we had afterwards.

We had four games running in all, one each of 3, 4, 5 and 6 players. The testers were on their third game of the day by then, each playing with the same new season 3 team they’d had all along. By this stage they were well into the swing of their new side so they were able to cope with the anarchy of a multi-player bash. And what anarchy it was! Zees are bad enough on their own, but when you get two of them together with another four teams it was more than a little busy round the table. Some photos below. Note that almost all models are proxies.

The 6 team game made for a very busy pitch. 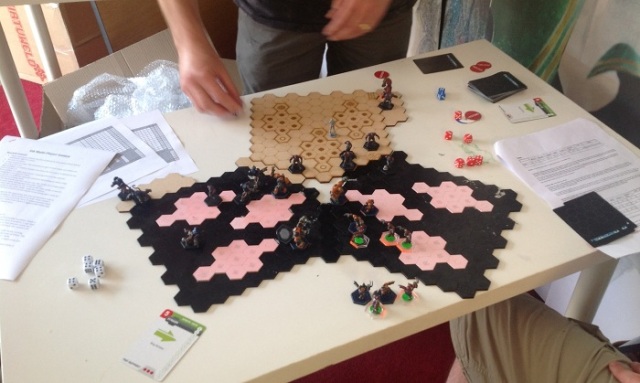 Not so much in the 3 team version.

In case you were wondering who to blame.

The games came in at between 90 and 120 minutes or so play time, which is about right. Obviously it takes longer to play games with many more coaches, though the first game to finish was actually the 4 player one which ended in a landslide.

Overall the multi-player game is a bit more light-hearted than its smaller cousin and several of the testers said it would make an ideal pub game. I’m not sure the non-gaming public is ready for that, but you never know.