Salute was a long and slightly hectic day, and seems much further back in the mists of time than this time last week. Unusually for me, I went as a customer and spent much of the day wandering about the many stands, looking at the demos and chatting to people I knew.

Overall, it was a fun event and one I’d recommend to anyone with an interest in wargaming with miniatures. I did have a slight sense of disappointment though, and I think this comes from the huge pre-event noise we get these days. It used to be the case that I’d roll up to an event not knowing what I’d find, and discovering the gems I’d not heard of before was a big part of the buzz. These days, everyone bombards all the news sites with special offers, limited editions, and show deals, so it’s hard to not be aware of all the goodies in advance. Entirely understandable on the part of the companies – I still miss the excitement of discovery though.

That said, I did discover some new cool stuff, and seeing things for yourself beats pictures on the net every time. So, what did I get? Well, I thought I’d start with my biggest surprise: the entirely unexpected quality of Wargames Factory Ashigaru.

Yes, it surprised me too.

Now I knew that WF made Ashigaru, but having seen several of their earlier kits I hadn’t made the effort to check them out. Early WF efforts were simply awful. No two ways about it. I’d seen them with my own eyes and they really were bad.

So, when one of the chaps I went down with said he was on the scout for some Samurai figures, I suggested Perry. Can’t go wrong with Perry 🙂

I’ve had a number of Samurai armies over the years and own a number of the Perry Samurai. They’re very nice and a reasonably complete range too (something the Perry twins don’t always manage). Anyway, Nate was talking about WF, and I told him that I thought it was worth spending a bit more to get decent figures. I made the assumption that they’d be as bad as all the other figures I’d seen from WF, based on having dug through a number of different boxes. Well we all know what assumptions do…

On the day, we all did our rounds and got our bits and bobs, and as we left Nate showed me the box of WF Ashigaru he’d picked up. Eye-bleedingly awful box art was not helping his case, and I gave him a merciless ribbing on the way back. That was until we stopped for a drink, and he opened up the box to see quite how bad they were.

Well Nathan being the kind chap he is, he let me blag one of the sprues out of his box so I could have a play with them myself. This morning I finally got round to sticking one together, and I think he’s rather nice. 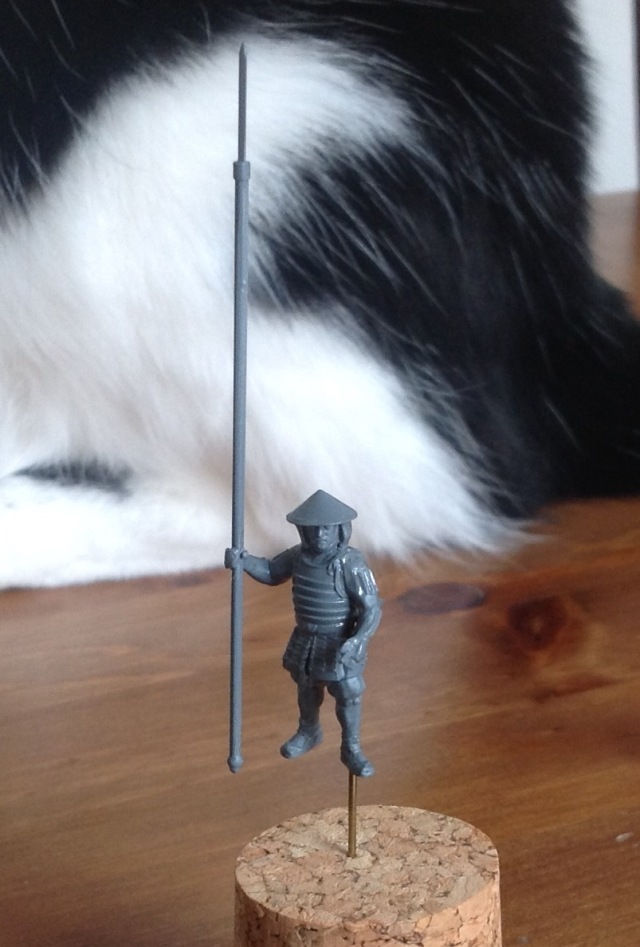 As you can see, he has the longer style yari – shown here full height.

The box (with the hideous artwork on the front) contains 5 identical sprues, each with 5 models on. This is what’s left on mine after I built this model: 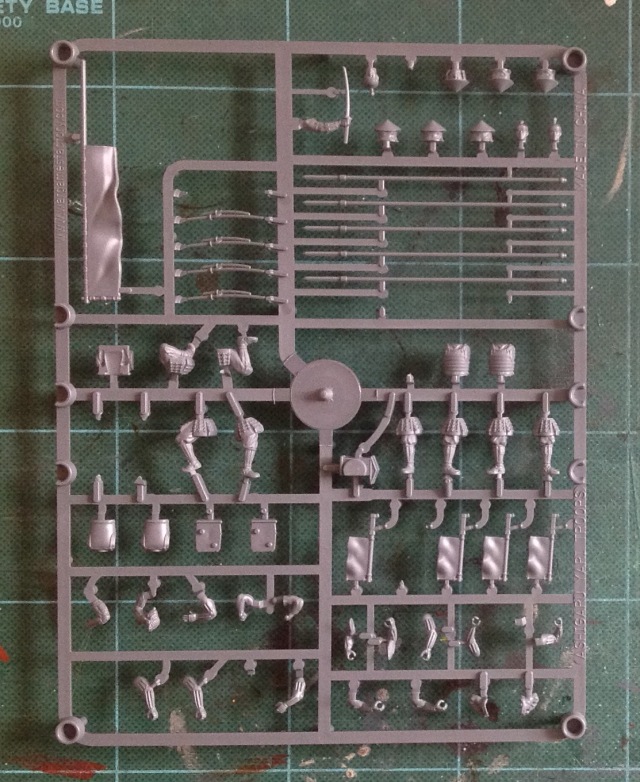 Assembly was straightforward. Nothing particular to say about that. I modelled him holding the hilt of his sword, which took a little work, but nothing desperately hard.

One thing I have seen mentioned in reviews of these kits was a lack of, or soft, detail. The detail is less pronounced than on many wargame kits, being more akin to that on plastic Tamiya figures. And I think that’s where the issue occurs: people say it’s soft because they’re expecting to see GW style exaggeration. WF have gone a different route; perhaps a more realistic, scale route.

Personally I think the detail is perfectly sufficient and can’t really see a problem. But judge for yourself. Here are a couple more pics.

Could the kit be improved? Yes, we could have more poses, more variety of faces, some different headgear, and all the sorts of things that geeks want in their toys. True, it could be improved. However, I think it’s actually a pretty nice kit as it is. The model looks like what he’s supposed to, has nice proportions, and I can see them looking great en masse in units.

Changed my expectations of WF completely.

Naturally, as this is only one of WF’s 4 “Rising Sun” kits, I went and ordered one each of them to see if they were all this good. I know, I know. I don’t need a Samurai army, but I’d like one. Like I said, I’ve had them before, though never a full army in 28mm.

It’s all Nate’s fault. Thanks Nate 🙂