A Few Thoughts On Age Of Sigmar

Posted on October 4, 2015 by Quirkworthy

A warning: this is something of an unplanned brain dump and so it’s long and rambling. I hadn’t planned to write this, and I’ve not got a specific axe to grind or point to make; it’s just talking around the topic.

People keep asking me what I think of Age of Sigmar. Well I wasn’t going to wade in on this as it’s already had a great deal of online comment, and none of it actually makes any difference to what GW have and will do. Still, as a way of getting some thoughts on paper, and to answer the question before someone asks me again, here’s a few thoughts on the matter, for what they’re worth.

I played Warhammer since my brother bought first edition, got bored with it, and swapped it with me. I played every edition till I got to 6th, which I helped to write (along with a couple of army books). Over the years I’ve fought with every official army at one time or another. After I left the company I played a couple of games of 7th and none of 8th. Basically, after c25 years of playing Warhammer, some of the time several games a week, I’d done everything I wanted to with it, and didn’t feel like there was much left in it that I hadn’t seen. Time to move on.

After this I wrote my own fantasy battle rules: God of Battles, for Foundry. They offer different tactical challenges and a much more relaxed style of play. Unfortunately they became embroiled in the managerial upheavals at Foundry and have never been properly promoted or supported, which I think is a shame. But then I would 🙂

One of the many things I’ve done for Mantic is write the additional rules section for Kings of War (superseded by the edition that’s just come out, I think), and I even played in their first KOW tournament.

I mention all this simply to say that I’ve had a long history playing fantasy games, and have also played, or written parts of some of them. I spent a decade working for GW, and now write games professionally as a freelance designer. So I look at this from a number of different directions.

To date, I’ve not played Age of Sigmar, and as I type this I don’t feel much like changing that. When the free rules came out I read through them, then the army lists, so I could follow the debates. GW are the big dog, so it’s always worth seeing what they’re up to.

My first impressions were surprise, intrigue, and jealousy.

Surprise because it was such a departure from previous editions.

Intrigue because that departure was clearly going to shake things up (presumably GW’s intention).

Jealousy because we were never allowed to do anything like this when I worked in the design team. Looks like it would have been fun to work on.

Now whenever you change a rules set it always upsets someone. That’s unavoidable. And pretty much whatever GW do there’s an outcry on the web. So legions of excitable posters on various forums was something that was always going to happen when AoS appeared, especially given the degree to which it appeared to depart from previous editions. Given this predictability, I just ignored it. The real fallout, as I suggested in an earlier post, won’t be visible for a long time.

Clarifying that point was what precipitated this whole ramble.

The fallout I was thinking about was different to the one that Brian (who asked the question) thought I meant. I should have been clearer. He thought I was talking about the fallout and immediate reaction of tournament players, which I’m pretty sure is irrelevant to GW. That’s not what I had in mind when I said fallout. I mean the financial bottom line as customers vote one way or another with their wallets. This will take more than one accounting perio to settle down. From many discussions with different gamers from different countries and different gaming groups, lots (though far from all) existing fantasy gamers seem to be giving AoS a chance, so it may well stick. A number of people have told me that they’ve gone back to AoS after being put off by the overcomplexity and sprawl of 7th and 8th, so it’s not all naysayers (despite what the internet thinks). Other people tell me that it’s simple enough to play with their children, and they love that shared experience. Also, those that leave it for other systems such as KOW may well drift back later if that doesn’t suit them either. “Better the devil you know…”

Remember also that tournament players are not GW’s core audience, despite their massively disproportionate volume online. Which system is used for fantasy game tourneys around the world is highly unlikely to be informing decisions in GW HQ any time soon. The only way we’ll be able to measure the success of AoS is by long term sales.

So I think that it’s way too early to really say what the results of this dramatic change will be. 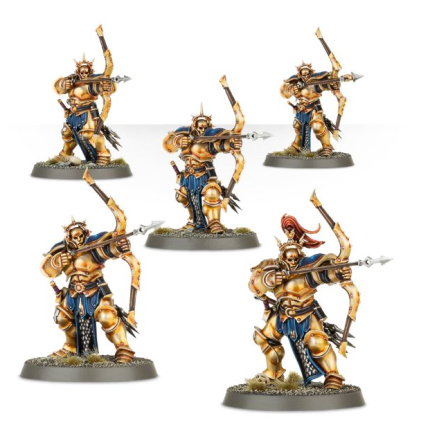 There are other issues, while I’m rambling. I haven’t seen any models I like in the new ranges. They’re well produced in the house style, as you’d expect, but none of them speak to me, and that was a surprise. Making fantasy models look like Space Marines also seems strange (and really naff), and looks especially odd when you arm them with bows. But models in AoS, like every other game, are a matter or personal taste, so that’s just me. I’m sure some folk love them.

Then there’s the “cluck like a chicken for a +1 to your dice” rules. I made that one up, but you know the ones I mean. Can’t say I’m a fan. This sort of thing is amusing once, and then rapidly starts to grate. Now I’m happy to provide sound effects and act out exciting moments of a game when the moment strikes in a spontaneous manner, like most other gamers I know, but this is forced humour and that’s seldom as funny as the canned laughter thinks it is. As always though, this is my personal view, and I know that I’m not the intended audience for AoS, so perhaps it’s not fair criticism.

As a final thought, I don’t actually think that the rules change is the most critical one here. Warhammer has been around for a very long time and rules come and go. I think the drastic change (loss) in IP is far more important.

66 Responses to A Few Thoughts On Age Of Sigmar