Looks like Kickstarter is starting to roll out some of its recent experiments to a wider audience.

Yesterday I got a feature I’d seen mentioned on forums as being in test. That’s the pledge levels being a separately scrollable panel. Sort of useful.

Along with this has come an update of the creator box on the main page from: 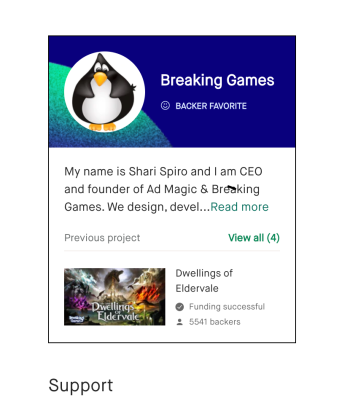 Not a big change, but a change nonetheless.

The most obvious difference is the addition of the thumbnail for their last campaign. That’s colourful, if nothing else. Not convinced that’s especially useful. If I want to know their backstory, I usually want to know the whole thing.

The number of campaigns that they’ve backed has disappeared from this summary though it is present if you click on it and get the expanded details. Those, by the way, look unchanged apart from the buggy rendering which currently shows some of the first page’s elements superimposed over the top of the second. I’ve tried reporting it, but unfortunately KS bug reporting also has a bug in it… sort of.

The other bit I’d not seen before is the smiley and “backer favourite” tag directly under the name. Currently everyone seems to have it, which makes it meaningless. Perhaps we’ll see an explanation from KS at some stage.