DreadBall and the Elephant in the Room

The elephant in the room* is a colourful and evocative phrase that I rather like, but one which is rarely appropriate. Here, for once, I am happy to say that it is.

The elephant is, of course, Blood Bowl.

It was obvious from the outset that whatever DreadBall was or was not, it would be compared to GW’s Blood Bowl. Whether this was going to be favourable or not depended on the individual, but compared it would certainly be. This is exactly what is happening now, and so I would like to take a few moments to discuss the similarities and differences from my point of view as designer, and explain my decisions and talk a bit about where the concept for DB came from.

Firstly, let me say that DreadBall is very deliberately, NOT a Blood Bowl clone. I cannot stress that strongly enough. 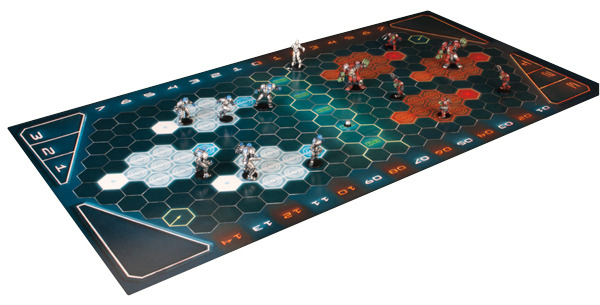 Regular readers of my ramblings will know that I always start a design by writing a brief for myself. This helps crystallise the key points to bring out in a design, and gives you a reference point to return to if things need adding or trimming later to keep you on track.

The first point on my brief was that DB should not be like BB.

Now it’s unusual (and possibly bad form) to start with a negative, but I’ll tell you why this was critical, and why it’s really pushed us into a major set of positives. There are 4 main reasons:

1) Blood Bowl is a great game. I might even say it’s a classic. Certainly it has been around for 25 years and has a vast amount of nostalgic good feeling attached to it for many, many gamers. You cannot compete with nostalgia, so attempting to do a better version of BB (ie fantasy American football) was inevitably doomed to failure. Setting out to produce a failure is stupid, and as a I try not to be stupid** I wanted to avoid this.

3) I have some pride. Or perhaps it’s arrogance, or ego or whatever. Whatever you want to call it, I like to think that I am quite good at this game design lark, and so I don’t need to copy someone else as a crutch for my inability. I can design something that is good in its own right as well as containing some unusual and inventive bits.

4) People deserve better. As a gamer, what would I want? Same again or something new and cool? What I think I really want is something that I didn’t know I wanted till I played it. If you see what I mean. A fun surprise. And in design terms that means sticking your neck out and trying something a little different.

So there are a lot of reasons not to try copying something as well known and as popular as Blood Bowl. Of course, the brief had lots of other things in too, and I’ll talk about that another time. For now, let’s get back to the elephant. 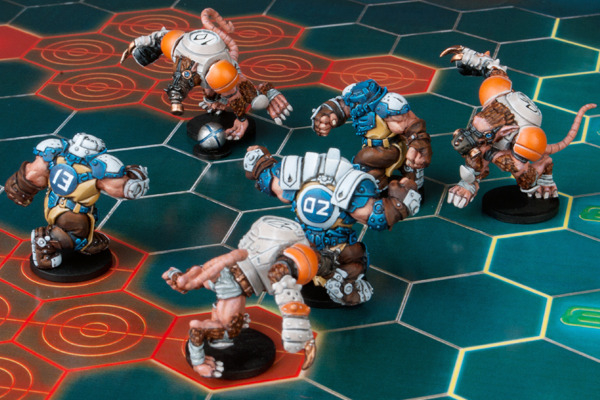 There are some similarities between the two.

To start with, they are both board games that use dice and miniatures. They are also both about fictional sports (one fantasy, and one SF) that use balls. In other words they fall into a similar category. That doesn’t make them the same thing though. If it did then you could equally say that Snap was the same as Bridge because they are both card games, and that would clearly be silly.

There are a few detail similarities – reality modelling ones. For example, you can throw the ball in both games. It’s true that it’s harder to throw a ball a long way than a short one in both games too, but that’s just reality for you and would be odd any other way.

Both games have league rules (like real sports) and players can get better with experience (just like real people do).

In both game  you lose control of your Rush (turn) if you drop the ball. Again, this is generally what happens if you lose the ball in a real sport – the other guys get the initiative, which is what a game turn is effectively representing in almost any game.

What I’m trying to say here is simply that the things that are most similar are all a function of modelling a similar reality. It is harder to throw a ball accurately if the target is further away. People learn new skills with experience. And so on. That is therefore true in both games, but it doesn’t make the games the same. 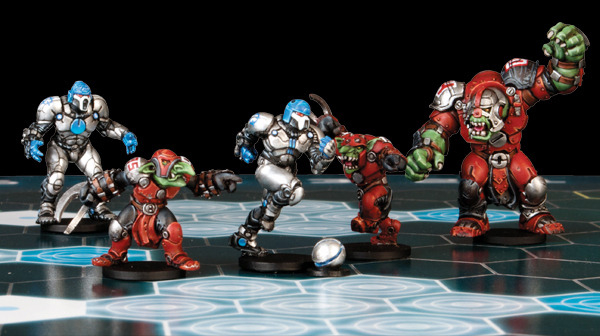 Mechanically they are totally different. See the thread here for more discussion of rule details in DB.

How you activate models and how much you can do with them in a turn is very different. A DreadBall turn is called a Rush. In a Rush a Coach gets 5 Team Action Tokens. These can be spent as he wishes, each one activating a single model of the 6 players on the pitch. There are a number of different actions to choose from, and different players have access to different ones and do some of the same ones differently. With this flexibility a single model may act up to two times with Action Tokens (and more if he wins Free Actions or plays cards) in a single turn. It is the choice of the Coach. Obviously with 5 Actions and 6 players, some of them will have to miss out. Who will that be? Decisions, decisions.

Compare this to Blood Bowl where each model acts once a turn. There is no tension or options. You always get to act with everyone (barring turnovers). In Blood Bowl there is a certainty that a given model can only move so far so you can plan exactly. In DreadBall it’s much harder to be sure because there are many more possibilities and you have to guess what your opponent is going to try to do, as well as whether he will succeed or not.

Scoring is very different. In Blood Bowl the pitch is like a Rugby pitch or American (or “real”) Football pitch with a single area at either end where you can score and nothing in the middle. This gives little tactical “texture” to the bulk of the playing surface, and I wanted to change that. Pinching an idea from pinball, I’ve given DreadBall multiple areas on each side of the pitch in which you can score, and they have different values (between 1 and 4) depending on how much risk you want to take. This lends texture and variability to the main body of the pitch and offers a Coach a number of options for scoring in most Rushes. Just so you know, scoring in DB is called a Strike (like bowling), hence the areas in which you can do it are called Strike Zones, the target is the Strike Hex, and the player type that is best at doing this is called a Striker.

Overall, DreadBall plays faster and smoother with no “resets” after Strikes. When someone scores in Blood Bowl play stops and all the models are reset on their own side. This allows for a certain amount of planning and positioning and a number of standard plays and set ups have grown up. In DreadBall I’ve gone for a very different model. DreadBall games don’t stop when a Strike is scored. Instead, the ball is immediately relaunched onto the pitch across the centre line. The Strike ends that Coach’s Rush, and so it is now the opposing player’s go, but none of the players are reset. This has a few interesting effects. Firstly it makes the game faster. Moving all the models and then deciding how to redeploy them inevitably takes a minute or two. Mostly this is thinking time for the players, so how long depends on the individuals, but it takes more than zero time. So, here DB saves some time.

Having no resets also introduces a new tactical problem to solve. If you run all of your players down the other end of the pitch to swamp the defence and score, as soon as you have done so the ball is behind you and the opposing player has a free run to your Strike Zones. This means that you have to think ahead to where the ball will go if you are successful as well as what might happen if you mess up. This tends to wrong foot new players the first time it happens because it is so different, but it very quickly makes for a smoother and faster game.

DreadBall deals with slower teams better. It is possibly a detail most people don’t care about, but I always felt that slower teams lost out in many BB leagues. Dwarfs, for example, can’t score as many  times as others ‘cos they’re just too slow. They can often close down the other team too, so overall scores are often low when they are involved. However, when scoring totals get used for tie breakers in league placement they inevitably lose out to fast teams like Wood Elves or Skaven. DreadBall uses a differential scoring system so it is the difference between the scores that dictates winning and losing. This means that even if one of the DB teams was as slow as BB Dwarfs (which none of them are) they would still be in with an equal chance in a league setting because winning by 1 is winning by 1 whether this is 13 points to you and 12 to your opponent or only 1 ever. What is tracked in game, and what matters at the end, is the difference.

Incidentally, in DreadBall there is a landslide instant victory if you ever get 7 more than your opponent at any point, and a Sudden Death tiebreak if the game gets to the end of normal play in a draw. There is always a result.

There’s a lot more, but you get the idea.

Will the Elephant Please Leave Now?

I understand why people make the comparison, and it is an excellent shorthand to say that DB is like BB if all you mean is that they are both fictional sports board games. Beyond that, however, they are completely different games.

DreadBall is not intended to make people abandon Blood Bowl. It is an alternative that many BB fans will also like, and hopefully will play as well, relishing each for their unique tactical challenges. 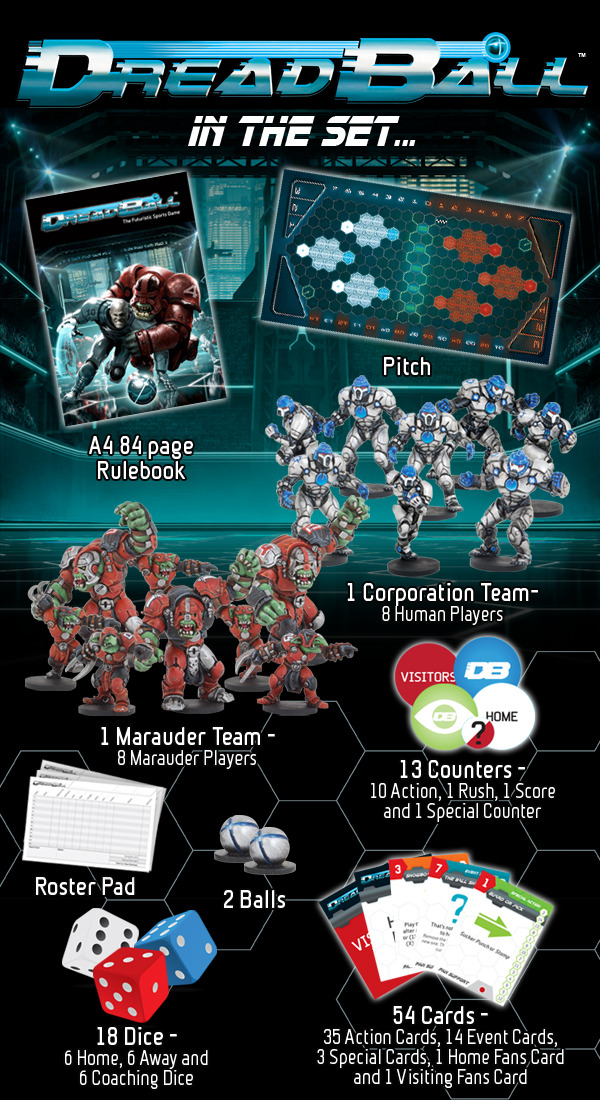 The DreadBall Kickstarter shows you some more photos of what’s in the box.

* In case you aren’t familiar with the term, it’s explained here.

114 Responses to DreadBall and the Elephant in the Room