Of all the trends I see in the gaming industry at the moment, the one that I find most concerning and potentially disruptive is 3D printing.

Currently, companies use this as an increasingly important part of their design and mastering process for the plastic, metal and resin models you buy for your games. It’s actually been quite a big help in that regard. The problem potentially comes when the 3D printers get cheap enough that a 3D printout of a file becomes less expensive than buying a plastic, metal or resin model from someone. What happens then? 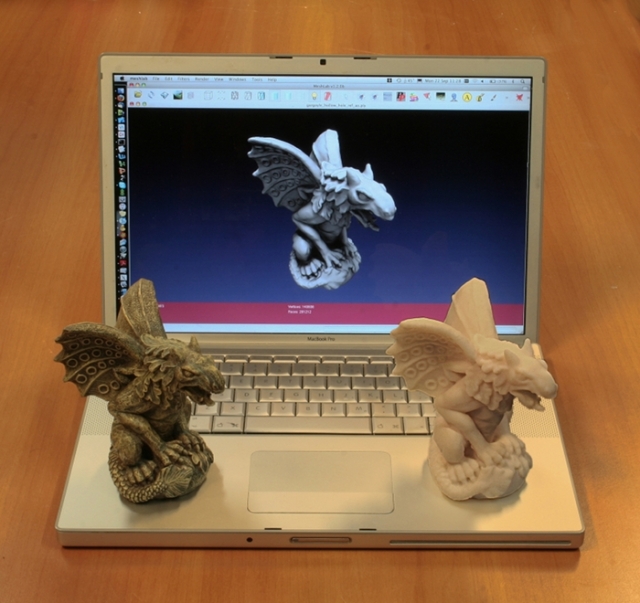 We’re getting there fast. Prices of the printers themselves, and of using them in a copy shop sense, has fallen dramatically over recent years, and like all other technology it is likely to continue to do so. The 3D files they use to print from are easily made (if you have the software) and transferred via email or file sharing sites. As you can 3D scan existing objects, I can’t see that there will be any trouble in a customer wanting, say, a Space Marine and getting hold of the 3D file needed to print from. And once he has the file he can print as many as he likes.

Now I can imagine there being some of the usual “GW deserves it” kind of chatter, but that’s not the point. This applies to every company, not just GW. Clearly the most expensive models and the best known ones will be the first to get pirated. However, as the price of the tech comes down more and more companies will be vulnerable. Of course, it’s unlikely that anyone will spend the time to copy the Pig Tickler models early on, but it only takes one person to do it and the file could be available on torrent very easily. Of course, the more obscure and cheaper models will last longer, and I can see some customers supporting favourite companies because they think they should. Like I said though, it doesn’t take many people to cause a problem.

So what? Well, if a company cannot make enough money selling the models they won’t make more. If people make 3D bootleg versions of Space Marines what happens to GW’s bottom line? If this were to happen to just GW that’s one thing, but if the tech applies to everyone?

Maybe I’m just being alarmist. I can, however, envisage a time not too far away when a combination of the 3D software and the animation programmes allow me to pick a human 3D model from my files, select a fighting pose and a uniform to print him in, and hey presto, 3D prints of a human in any period of history and in any pose and scale I choose. And these 3D models already exist for all the computer games we’ve seen. Including all the GW IP.

The next step would be to print in colour. That tech is not with us yet, but do you really think it’s not going to happen? Accurately pre-coloured 3D models anyone? Who needs to  paint then?

Now I see this technology as inevitable rather than possible, so I’m interested not in whether it will happen but what the implications will be. This, more than anything else, seems to me to require a sea change in the way large miniature companies think and work. Smaller companies and those making less expensive models will be immune from this for longest as humans are fairly lazy, and for most it will be a long time before it’s easier to print out than it is to simply buy what’s on offer. Even expensive boutique companies will be OK as their stuff is too obscure to be bootlegged quickly. At least, they can hope. GW and Privateer are probably the first targets, with the large and expensive display figures from Pegaso or Andrea coming up close behind. I already know people who routinely make resin copies of GW stuff for their own use, we’ve all heard of the Chinese commercial knock-offs, and they’re just using traditional technology. The intent is there, and the 3D printing technology is catching up.

This will not happen overnight. It will, however, become a staple of the forums and as it gets cheaper it will become more commonplace. The rank and file plastics will continue to be cheaper than 3D prints for a long time, so we’re talking about character models and suchlike as the first targets. The lack of a bits service from GW has long pushed people into making their own copies and 3D will exacerbate that.

Perhaps GW’s reliance on new, young gamers to provide the bulk of their sales will insulate them. These won’t have access or knowledge of the 3D options immediately, and as long as they go to nowhere but the GW stores they aren’t likely to be told. How long will that last?

I am hoping that this will encourage good things as well, and would like to see the benefits outweigh the problems. There are a number of ways this might happen. Firstly, it may become a practical industrial process, so that models which sell in smaller quantities such as characters could be 3D printed by the manufacturers themselves, bringing their price down to closer to the rank and file. The industrial version is bound to be cheaper than the desktop variety, and probably better quality too. Wouldn’t this be a better leap forward that Finecast?

It’s not just the price either, though that’s important. 3D models can be printed in a single piece, without assembly being necessary, and high end prints won’t need clean-up either. I’d really like that.

The prices of some other mass production technologies are themselves dropping and this makes companies more able to compete. The lower the price of the traditional figures the less threat from 3D printing and there is perhaps a meeting point. If the lowest point of 3D print cost is still a few pounds or dollars per figure then the rank and file models will end up being plastic and still no more costly to the end user. It’ll still be easier to get them from the company rather than go through the fiddle of 3D print and the companies will chug along as before. Well, having modified what they do with the expensive characters.

And what of collectable figures and limited editions – on eBay as well as directly from companies? Hmmm.

3D printing is an intriguing option that is already impacting on the way models are made, and has a lot more yet to do in the way of changing things. Here’s hoping that the changes are for the better.

This entry was posted in The Business of Games. Bookmark the permalink.