How Large Is Your Martian?

I’ve seen a few people asking how big/bulky/etc the Mars Attacks models are, and having managed to scrounge up a couple yesterday I thought I’d do a few comparison shots for your amusement.

The MA models look like they’re made of frozen milk because they’re 3D prints and that may be what they’re actually made from. Whatever it is, it’s translucent and very hard to pick out details, but that’s not why we’re here. There are lovely photos of the nicely painted models all over the Kickstarter, Mantic’s blog and so on. This is all about size.

I’ve tried to prop up models where appropriate so that the bases are close to the same height. I may be out by a tiny bit, but we’re talking under a mil, so the tops of the models are pretty close to right. Oh, and the final version of the Martians will naturally have a clear goldfish bowl on their heads too. Don’t forget that.

So, first up, how do the Mars Attacks models compare to Mantic’s other SF models? Here we have a Corporation trooper and an Orx. The Corporation model is a normal human in a bit of body armour, but isn’t all bulked out or bioengineered, so should be a good comparator for the Mars Attacks GI.

We’ve got to look at a Space Marine just because most gamers have seen them and it’s a useful benchmark. 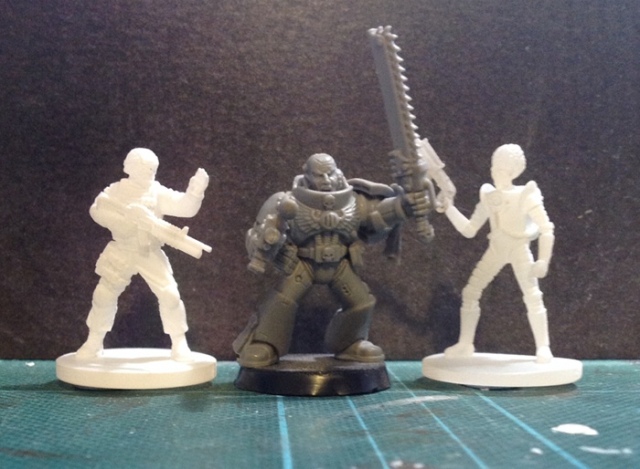 I only had one Infinity model to hand and it wasn’t human, but at least you Infinity players should be able to use it as a size reference.

Finally, I’ve been thinking of the Hasslefree post apocalyptic models and wondering if they’d fit in scale. Looks like they do very well.

So there you have it. How large is your Martian? That big.

15 Responses to How Large Is Your Martian?