There’s always something interesting going on in Kickstarter. Sometimes it’s a new trend, other times it’s a specific campaign, and there are always fun new games to look at. It’s a revolving shop window of shiny toys.

As my job and my passion is games, I look at the Kickstarter tabletop section most days. My aim is to at least skim every campaign that goes up, regardless of whether I think I might want the product or not. After all, you never know where a clever new twist on an old rule will turn up, or who will find a neat new way to engage with the audience. Learning can sneak up on you from anywhere.

All of this means that I have lots of ruminations about gaming on Kickstarter and being as how I’m hiding away in a bunker at the moment, I thought that I’d share some of this online. In-depth analysis and advice is what I do for the clients I consult with, but I thought it might be fun to discuss some of the more prominent trends and notable campaigns with you guys too. So, in no special order, here’s some of my current thinking on where tabletop games are on Kickstarter. Feel free to tell me how wrong I am in the comments below.

Having taken a hit in raw numbers of campaigns when covid-19 arrived, shed some staff from the losses, regained the campaign numbers briefly, announced that revenue was actually up, they’re now down in campaign numbers again. It’s been a bit of a rollercoaster.

Presumably the decreased numbers and increased revenue are both effects from lockdowns, with people spending time at home, away from their work and teams. Can’t coordinate launches as easily, but there’s no trouble clicking to pledge.

None of this seems to really pose any major threat to the platform; it’s just something to keep a weather eye on. It does strongly suggest that launching during the pandemic is not something to worry about from the POV of potential support. And, as a corollary, if you had a campaign that underperformed recently, you need to seek the scapegoat elsewhere. The pandemic is not an excuse for a lack of campaign performance.

Kickstarter’s tabletop games section was originally dominated by board games. There was always a sprinkling of other things, but their numbers were small. This is neither bad nor good, it’s just what it was. Now it’s changed.

The trend is for increasing numbers of non-boardgames in the tabletop games section, mostly RPG supplements and lately STL files for 3D printing. The latter is part of the rapid march of this technology and has been fascinating to watch develop from nothing only a few years ago. Nowadays 3D printing is central to the workflow of many miniature companies, and this is only going to grow. Mind you, that’s a big topic for another day. 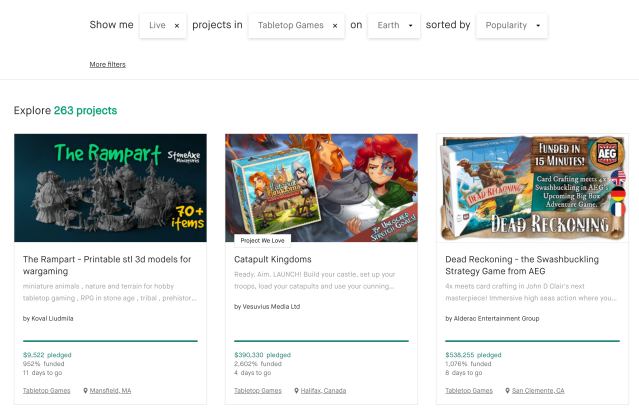 As I write this an STL campaign is the most popular campaign in the category.

There are also occasional amusements like Cthulhu bottle openers. Not sure how that belongs in the tabletop games category, but that’s where it is. I’m not saying we should rush out and report it; the campaign’s not doing any harm in the category and you can see how its potential audience will have some crossover. What I’m wondering aloud is really whether there’s much function to categories when they’re being ignored. Again, this is really a bigger discussion about finding information in the internet age.

This trend of changing focus for the category does make me wonder whether it would be a good idea for KS to split tabletop games into subcategories. After all, we already have a separate category for card games, and we have more RPG campaigns than that.

I’m somewhat torn between thinking that the cross-pollination between games all being in the same place is better (arguing to roll card games back into the mix) and splitting them up making it easier for backers to find what they want and not miss a potential gem in the wall of irrelevancies. What do you think? Would it be easier or harder to find what you want if, say, RPG and STL campaigns were in their own categories?

That’s weird as I’m usually backing something. However, all the tasty morsels I’ve been supporting of late have finished and there’s nothing I’ve jumped on yet. I’m still considering a couple though:

Yo ho ho and all that jazz.

Dead Reckoning. There’s lots to like here, with clever use of overlaid clear cards and an unusual combat mechanic (this latter feature is likely to be a bit of a love it or hate it thing). Clear cards have been used for a while now, though never by many people, and they offer some fun options for the designer. If you’re interested in game design, then it’s definitely worth watching the videos to see what Mr Clair has done. In the end, I’m leaning towards not getting it though. It’s mainly a balance of the cost compared with what it adds to my collection. While this is an intriguing-looking game and I’m sure it plays fine, I’m not convinced that it scratches an itch that none of my other games don’t already. I’d happily play it, but I probably don’t need my own copy. 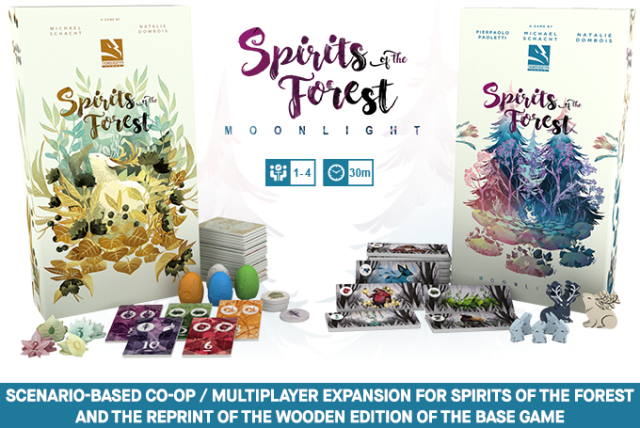 The other one I’ve been contemplating is the Moonlight expansion for the very pretty Spirits of the Forest. It’s an attractive and simple game I bought from their previous Kickstarter because I could play it with non-gamers like my mum. That’s not happening at the moment, but I’ll probably back this expansion because I’ll hopefully be back to socialising with other humans by the time it arrives.

One last campaign to mention this week: a foldable D20. (kickstarter.com/projects/mythroll/mythroll-armorys-foldable-metal-d20-for-rpg-tabletop-gaming):

The sheet fits in your wallet and folds into this dice. Neat 🙂

Not sure whether it was foldable flat again so you could stick it back in your wallet after you’d played. That would make it more useful. Still, the idea of an emergent game of D&D just breaking out like a flash mob tickled my funny bone.

Enough of me rambling. Have you noticed anything cutting edge and cool on Kickstarter lately? Are you backing anything special?

Finally, if you’re interested in discussing games at length, or are working on a design of your own and have some questions, why not join us on Patreon at Game Design Mastery?

This entry was posted in Kickstarter and tagged Game Collection, Game Design, Kickstarter. Bookmark the permalink.