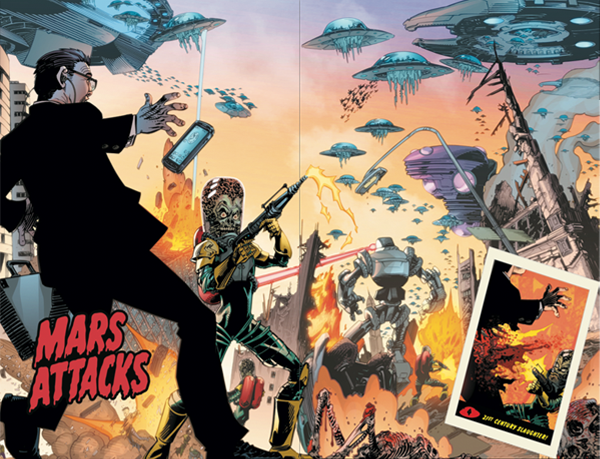 Nothing says “you’ve been invaded” quite as well as several huge robots crunching down Greenville’s Main Street, disintegrating everyone they can see. I’d really like to be able to get that image onto the gaming table in Mars Attacks, though the reality is that a single mat just isn’t big enough to contain lots of these monsters – they’re just too big!

So, as well as the single mat scenarios with the big guys in, we’ve been playing with the idea of a larger game, fought across several of the gaming mats. The nice thing is that the rules are so simple that this remains a fast and furious scrap, with the heroes standing out as larger than life even among the robots, saucers and armoured trucks.

The rules need a couple of logistical changes for dealing with larger areas and a few more tweaks if you’re playing with more than two players (another fun option). In the main though, they don’t change that much – what does change is the sweep of the battlefield (they look really impressive with waves of Martians, robots and saucers on) and the game play. With more on the table you can be even more cavalier with the lives of your Martian grunts.