Yesterday I found a nice little bargain whilst running an errand, and today I returned to clear the shelf. And what was this bargain? Dinosaurs. Thousands of them. Well, maybe not thousands, but quite a few. Enough for a proper looking herd (for a change), and all at a very reasonable price indeed.

Plastic dinosaurs are usually badly made, the wrong scale to game with, or (often) both. These ones are rather lovely pachyrhinosaurs from the film Walking With Dinosaurs 3D (Warning! If you are more than 5 year’s old you may want to turn the sound off on that trailer).

I’d never heard of that film, but I do have the various earlier BBC series of Walking With… XYZ and they are very good. Being based on that the models are unsurprisingly well-researched and well-made. Luckily, the ones I got were a good scale too. Sadly, the rest of the range is of no use, but let’s not look this gift horse in the mouth.

Here they are, just out of the packet and not cleaned or repainted. The figure doing the dangerous job of providing a scale is a Foundry ACW trooper. 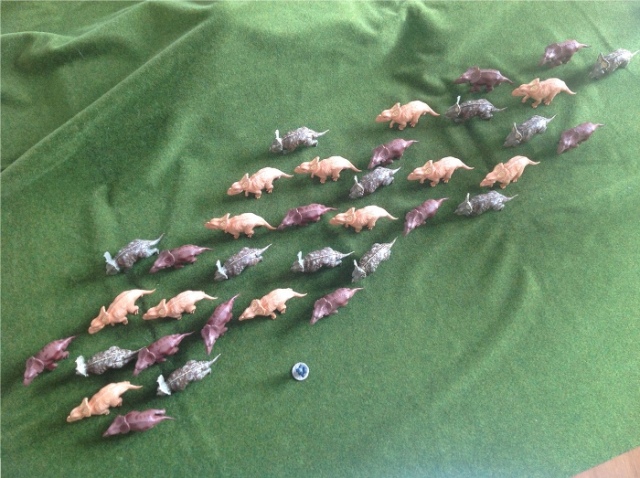 When I say a whole herd, here they are from above. The circle at the bottom is the ACW model. On a 3×3 or 4×4 table they have quite a presence.

So what do I have in mind for these? Well, I think that dinosaurs would make a great Twist for Eternal Battle. You could add them to modern Settings (Jurassic Park style), Victorian Lost Worlds, “Caveman” games or anything else. This last shot is a bit blurry as it’s from the dawn of film in the late 1860s. 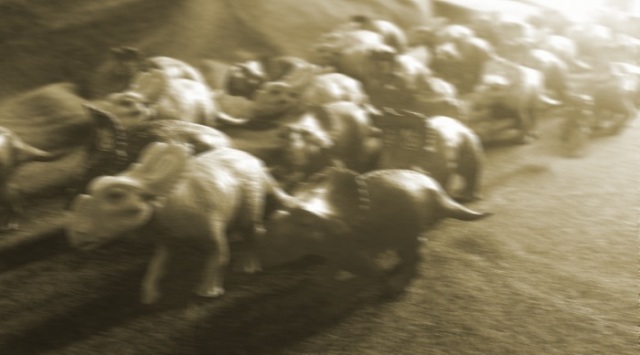 There are a number of metal ranges of dinosaurs, and some lovely models among them. My issue with them is really only one of price. Ones and twos of high end predators is fine, a few of this or that of the smaller dinos for colour is great too. But all the most memorable of the imagined prehistoric vistas I’ve seen since childhood have been dominated by herds of the big herbivores, and though pachyrhinosaurs aren’t enormous they look grand en masse and really set the scene. Now, having saved on this broad canvas, I can root through the metal ranges for some additional details. Who knows, I may find something at the show on sunday. Does anyone have any suggestions?

This entry was posted in Eternal Battle, Random Thoughts. Bookmark the permalink.