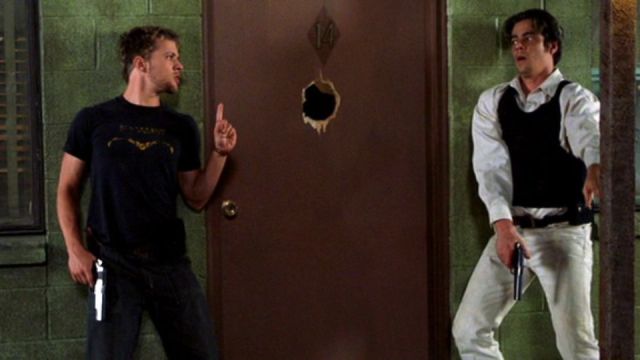 Thanks for all the film suggestions folks.

As you might expect, I’ve already got a number of them, though that doesn’t mean I’ve watched them recently. Even those I’ve seen are well worth re-watching.

One comment that I thought was worth discussing more was about Collateral. This Michael Mann directed Tom Cruise/Jamie Foxx movie has a number of scenes containing firefights and is well worth watching for action/thriller movie fans. Tom Cruise with very blond hair always looks a bit odd, but that’s possibly just me.

Perhaps the most interesting scene, from the viewpoint of modern skirmish games, is the shootout in the nightclub.

To recap on some basics: there’s a busy nightclub with hundreds of people in, dancing away. At the back is a Bad Guy, surrounded by his many bodyguards. So far, so busy. It’s loud, crowded, and full of armed guys intermixed with largely unaware civilians.

Pursuing Tom are the LAPD and FBI. More guys with guns. They also think that Jamie is Tom. At least, some of them do. It’s complicated.

So, you’ve got multiple factions, all with different agendas and mostly with lots of weapons in a very crowded and confusing space. How would your favourite skirmish game cope? Find some popcorn, watch the scene, and have a ponder.

There are several major challenges in modelling this fight. One of these is the noise and lighting that makes target identification very difficult. Here you have some factions that will happily shoot anyone in their way, and others that will try to avoid causing injuries to civilians.

Your rules have to cover differing rules of engagement, and accurate target identification is a part of making that work. Don’t want to shoot the wrong people. And, even if you don’t care who you kill, you really want to take down the guys that are trying to kill you before they return the favour. Got to pick the real threats out of the crowd, and do it quickly.

Non-combatants are a huge factor in this scene that most games don’t do well. Here we have way more panicking and unpredictable civilians than we do combatants (though we still have plenty of them). Although it doesn’t happen in this example, we frequently read about off-duty cops, servicemen on leave, and all manner of brave individuals who’ll have a go at the shooter when things like this happen in real life. Can our combatants trust the frightened civilians to conveniently run away? Not entirely.

Even when all the crowd wants to do is flee, they are dodging in different directions, running from multiple shooters in several directions; escaping through exits that cannot cope with the movement of that many people that quickly. There are bottlenecks and panic. people fall over. Are they shot or did they merely stumble? Does it matter? Should you be helping them? Back to objectives.

Do we need a referee to control these crowds, or just some AI system?

In the middle of this mess the factions are all trying to do their own thing. Need to have robust mission and objective rules to cope with that. SOP is important as well as individual mission specifics.

Factoring confusion into games is always difficult as we naturally start with perfect information. This is the opposite of reality where information is only dragged reluctantly out of a situation. On the tabletop we can typically see exactly where every participant stands, and know exactly who everyone is. We know the odds of each shot before we take it, and can foresee every modifier. None of that is available to the real individual on the ground in a real firefight.

The more I think about it, the more I think that recreating this fight should be a textbook test case for every skirmish game that purports to be able to model modern firefights well. Admittedly it is somewhat far-fetched in its complexity, but if you read AARs of real actions it’s not as far off as you might think. The confusion is certainly well done.

I understand that some players won’t want to include non-combatants in their games, and that’s fine. Much simpler that way (both mechanically and morally). But I like to be able to model as much of “anything” as I can, and this would seem like a good way to open up all sorts of interesting games I couldn’t otherwise do. Reality is messy, and combat doubly so. Games have to do a certain amount of putting things in neat categories whereas reality is always fuzzy at the edges, and it’s squaring this circle that makes game design such an interesting challenge.

For me, this nightclub shootout is a new benchmark against which I will be testing Eternal Battle, to see if I can replicate it well on the tabletop. Very challenging to include all these factors and still be slick and fun to play, but that’s been EB all over 🙂

Can you think of a system that could replicate this scene already?