We continue to have a good number of campaigns on Kickstarter’s tabletop section, and plenty of them are doing very nicely. However, for some reason I’m just not feeling very inspired by the last week’s crop.

It’s not that I think none of them would be fun to play, or that they aren’t nicely illustrated or presented. It’s not even that their campaigns are poorly run. At least, not all of them. In the end, it’s just that they lack that magical something which marks a project out as one for me. You know what I mean. It’s different for each of us, and it’s impossible to bottle.

Familiar Alchemy may be the way to distil the essence of cool. As you can see, they’ve finished a sample piece of each type, and show the rest of the art as sketches.

There are a few things I’d like to point out as interesting though. As we’re talking about capturing magical essences, let’s start with Familiar Alchemy. it’s not really offering anything new in terms of the game itself, but you’d have thought that they’d do a bit better than they are. I’m hoping (and not believing) that it’s not related to their incomplete artwork. Asking for the crowd’s assistance in funding this sort of thing is, after all, why Kickstarter is here. Unfortunately, these days you’re not likely to soar very high if you aren’t doing a passing impersonation of being finished and ready to print before you start. Visually, at least.

This shows two finished pieces and gives you a better idea of what the end result might look like. In the game you grow plants and then trim off bits as ingredients for your potions.

I think their plan of showing a finished example and then sketches for the rest is not unreasonable and is a prudent use of resources. Why pay a lot for art you can’t use if the project fails to fund? And the finished art looks well done too. The game itself looks fine if not anything new, but competently done and if I hadn’t already got a dozen things that could fill this slot in a gaming night I’d be tempted. Anyway, just thought it was interesting for the art question. Does this mean that your campaign needs more finished art, or at least to hide any that isn’t? Sadly, I think it does.

Occasionally, people cram all manner of extra gubbins into a higher tier pledge. This is stuff like coasters, badges, T-shirts, and posters – none of which is part of the game and all of which tends to pass me by entirely. Give me the game play and keep the tat, thank you.

This week I saw something that’s a new one on me – at least bundled into a game tier: a robot bully to call on to help win your online arguments.

The text speaks for itself.

I don’t think this is bad per se; it’s just weird. The campaign it’s from is Antematter, which is otherwise moderately interesting and could be entertaining to play. I like the idea of planets moving. I’ve tinkered with that idea too, and it creates some interesting effects on the board, especially if several planets orbit at different rates and you therefore have to plan with their various future alignments in mind. In fact, I’m expecting the imminent arrival of another KS game that uses this idea, though with a very different game: Solar Dominion Fleet Commander.

I’m always drawn to dungeon scenery, and this means that I’m also always needing to stop myself from buying sets I’ll never use. The latest in this line of tasty morsels to resist is Dungeons & Lasers. 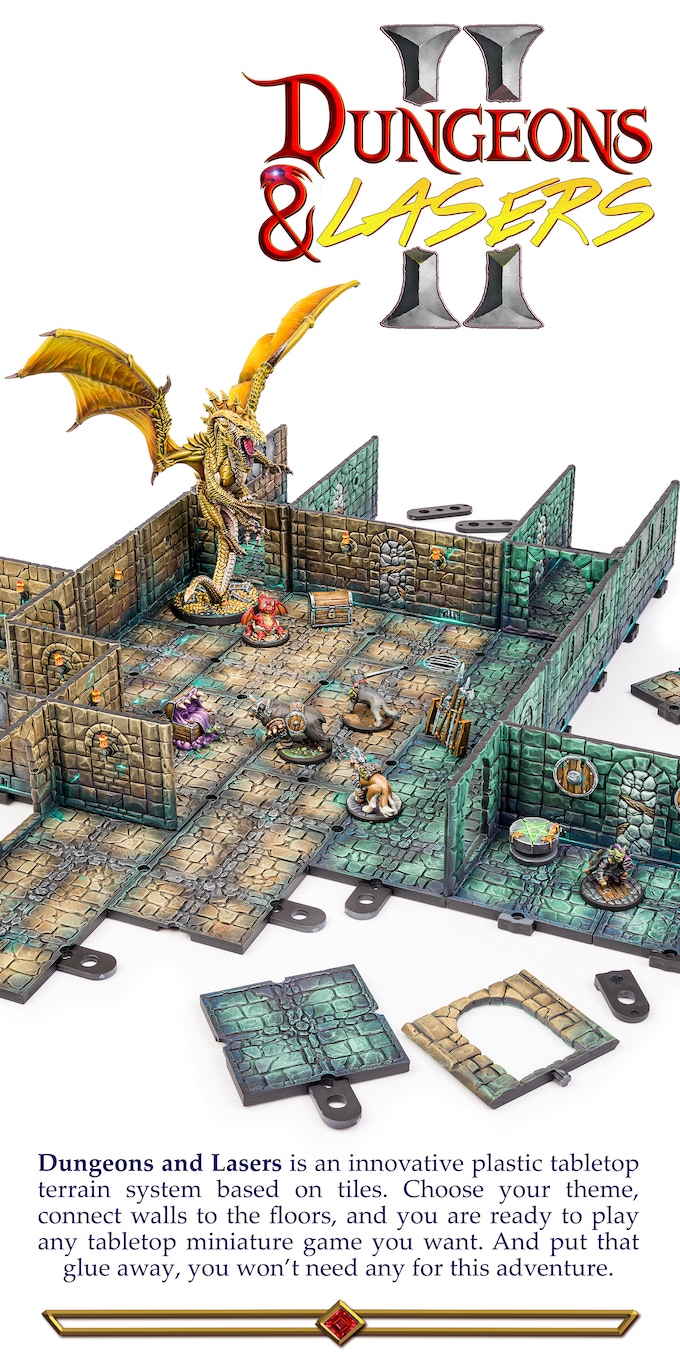 This looks like a solid and practical set, and I can definitely feel the gravitational attraction between it and my wallet. Even so, I have resisted because I think it’s the 16-year-old me wanting it to tart up the D&D games he’s running, not the slightly older version who’s not likely to be doing so for some time, if ever. Skirmish, you say? Yeah, maybe. If I could get my solo skirmish rules to work the way I want them to, then maybe…

I’ll finish with a very striking game called Die of the Dead. 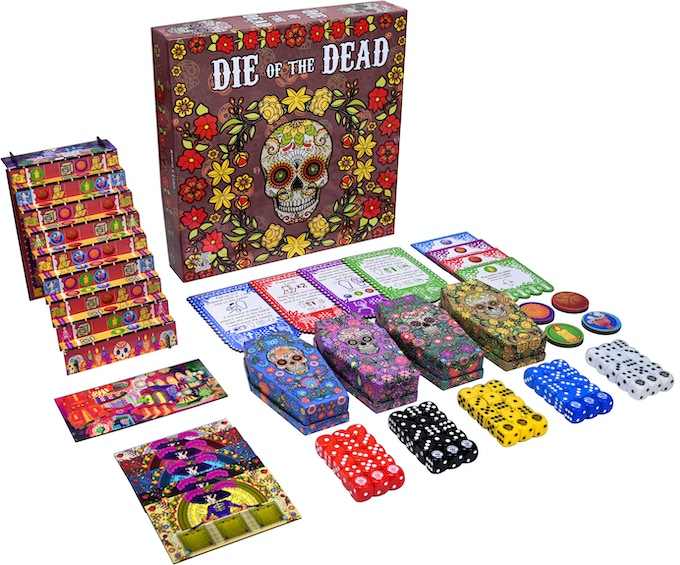 This is boldly illustrated with the characteristic skulls and flower motifs of the Dia de Muertos, and the overall package is strongly themed. Unless I’m missing something, the game seems a bit random for my taste, and while I used to go to a gaming group that this would have fitted perfectly, that was many years ago. These days I don’t see it getting on the table. It’s a not-uncommon reason for me passing on games that I would have wanted years ago. Not so much that my tastes have changed or that I’m no longer willing to play X or Y, but that the opportunities to play them have changed as I moved to a new city, house, job, or whatever. The pandemic has pushed me towards solo play, true, though I’m still looking forward to (and buying things for) playing with friends. It’s just that you need the right group of friends for each game…