Posted on October 8, 2011 by Quirkworthy

Please can I have my money back?

Those of you that know my writings will be aware that I tend, if anything, to be too even-handed in my approach to reviews, even if I am occasionally a bit blunt. If something is good then I’ll be the first to say it, as I will if there is a flaw. However, I always try to see behind the result to work out the why of the journey, if I can, as well as the what of the result. I don’t write stuff to bash GW or anyone else just because. However, having already posted my initial thoughts, I feel obliged to explain my subsequent ones.

My initial review of Dreadfleet was based on a single play of the first game (as I said at the time), and there I gave the game the benefit of the doubt. Have a look at that and my earlier posts about the contents for a fuller picture. Today I played against another of my regular opponents, Bob, and we had a couple of games. The second was the largest you can have with 5 ships each. Although I would normally want to play rather more than 3 times before giving a proper verdict, the rules for DF are very simple and I feel I’ve learned all I need to know. And had all I can stand.

The worst? Really? Worst by Phil? Worst this year? Nope. Worst ever. I’m trying to think of something that comes, as a whole package, further down the list than this, and am failing.

Worse than the Troll games?

Worse than Kerrunch! and SpaceFleet?

Combat Cards are (effectively) GW’s take on Top Trumps. A tried and tested forumla that was enormously popular for the reason that it was full of numbers and stats so kids could be the best; it was easily portable and quick to play (you could even stop in the middle, stick it in your pocket and finish it later) so you could play it in break at school or in the car on the way home. It filled a similar niche to the handhelds you see now (DS, etc).

Troll games were trite children’s games, and never pretended otherwise. They had cartoony art in bright colours and a tape of silly songs, all of which was bang on for the market it was aimed at. Playing these games with young children was actually quite entertaining because they were entertained.

Kerrunch and Space Fleet share the odd mechanic of rolling dice in the box lid, but they were still real games where you made actual decisions that had an impact on the game.

Dreadfleet, on the other hand, is a bloated monster of a game that has to breathe in to fit on a 6×4 table. Our game with 5 ships a side took almost 4 hours, and I don’t think it would be much faster with more practice (it was my third game and Bob’s second, and the rules just aren’t that hard to remember). Bob said afterwards that he’d “lost interest about half way through and the rest of it was just a tedious run through to finish the game”. He was not alone. I felt utterly drained and demoralised by the whole thing.

Bob actually won both games (though I think we felt more like winners when we could stop and do something – anything – else). He said there was “nothing I like less than a hollow victory” and both of them had been that. In the first game we went from me winning by a good margin, to me losing on the turn of a card. We were both surprised. Neither of us felt that we’d had anything to do with the victory or loss: it had just happened. And that’s the key failing for me: the game is random to the point of farce.

Now let me just say that I don’t mind randomness in games, nor the use of either cards, nor buckets of dice: they all have their place. However, here the design compounds randomness on top of randomness until you, as a player, have so little input in terms of meaningful choice, that you may as well not be there. The best example of this was Bob turning over a Fate card in the second game that allowed me to put 14 Damage cards on various ships (12 on Bob’s and 2 on mine). This crippled 2 ships and damaged 2 more. It could easily have sunk a couple had the random damage cards been different. Spiralling randomness.

If the game was that random and lasted 30-45 minutes then we’d be fine. Silly randomness is fine in contained bursts and as a “filler” game. Not for something that takes several hours. I had hoped that there would be less randomness and more planning or tactical options with more ships, but if there was it certainly didn’t feel like it.

It is a real shame, and a badly missed opportunity. Despite thinking that the ships would have been much better if they were proper fleets rather than a mish-mash, they are undeniably nice models. They would paint up brilliantly, and even without it they look grand on the “seascape” (mat). Sadly, for me and everyone else I have spoken to personally, the rules let the whole thing down. 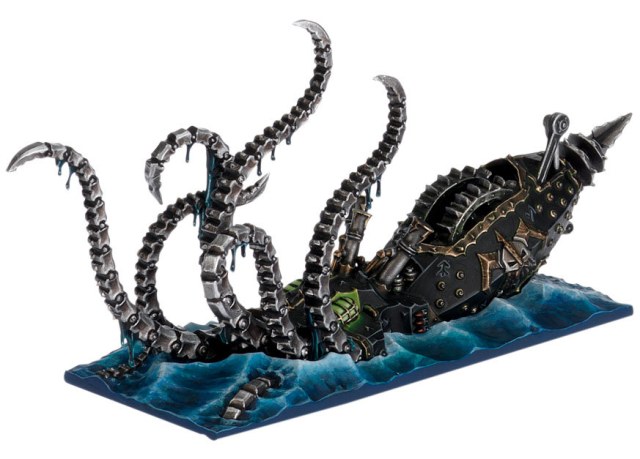 Perhaps the core of the problem is that the game seems to have no idea who it’s aiming at. It’s not a kids game because the models are too fiddly and delicate and the art too “arty” and grim. OK, so maybe it’s aimed at the older gamers who may have left the core games and are playing the likes of Space Hulk, Bloodbowl and Necromunda. I doubt this is the case, but if it is then it’s a big miss. The rules make Snap! look deep and tactical.

Which leaves us with the core audience of current GW fans. These are early teens boys who are into 40K or Warhammer (presumably more the latter). Perhaps this level of randomness is what they’re after. Leave your brain in a jar and just roll some dice. That is what I am told 8th edition Warhammer has done, so perhaps this is the coming thing and I’m just too much of a dinosaur to notice. Foolish me wants a game where I get to make tactical decisions: where I make the difference between winning and losing. Apparently that was so last year.

The rule to decide who had won this scenario was simple: Get as many ships off the table as you could, then roll a dice. In our case, after 4 hours of play, we rolled a single D6 to decide the game. On a 1-2 I would win; on a 3+ it would go Bob’s way. Did that make it all feel worth the effort? I’ll let you guess.

I could have bought a gorgeous 28mm Pirate ship from Ainsty (like the one above) with this money. I could have bought a couple of well designed and entertaining Euro games, or a sizable Epic army or two starter fleets and the rules for any of Spartan’s games, or any one of a wide number of entertaining models and games. But I didn’t; I bought Dreadfulfleet. Whatever you do, avoid making the same mistake as I did.

If you want a game that poses a series of interesting tactical challenges, keeps you on the edge of your seat with excitement and allows you to engage in a cunning battle of wits with your opponent, buy something else.

Pros: the ships and mat are pretty.

This entry was posted in Dreadfleet, Tabletop gaming. Bookmark the permalink.