Dropzone Commander Review: Is It Expensive?

This is the first step in a series of articles about DzC (as Dropzone Commander is apparently known to its friends). I will be looking at the book, the models and the game play of the beast in due course. However, before we delve into all that, I’d like to talk about something I’ve heard a lot in conversation about the game: “it’s pretty, but it’s expensive”. This seems to be a general reason for people not trying the game. I thought it bore a bit closer examination.

Firstly, I’ll agree that it’s pretty. We can come back to that later though. What I’m really interested in here is the notion that it’s expensive. To start with, expensive is a comparator – you can’t be expensive in isolation. So what is it supposed to be expensive in relation to? I thought I’d make a few assumptions and then do some back of an envelope calculations to see whether that criticism holds up.

How Long is That String?

You and I both know that most figure games don’t have an end to the armies you can collect. The company responsible will keep adding cool stuff and you can always find room for another unit in your force. So where do we stop? If we’re going to say something is expensive or cheap, modestly priced or extortionate we need some idea of what we are measuring. We need some ground rules so we can compare DzC to anything else.

My suggestion is that we compare the ante: what does it cost to “buy into” this game? How much do I need to spend before I can sit at the table with an army and any rulebooks, army lists and suchlike I will need? That sort of minimal game is seldom if ever the “real” game, but it’s enough to get the hang of the core mechanics and try the thing out. Note that I’m talking about the full game rather than any cut down “try this out” version that may be available. I think that in order to really get to grips with a game you need the full rules and the full army lists (and card decks, special dice, etc for your faction – but not normal dice or tape measures as I’ll assume you probably have those anyway). You can always buy another model, but this is about the basics. The ante, for me, is all the paper products required plus enough models to make a start.

I’ll be using the RRPs in pounds to make these comparisons. Currency fluctuations, varying discounts and so on make this a less than exact science, though in general the relationships between games should hold true. Don’t worry about the details too much. I’ll also assume that you’re going to buy all of this at once so you can take advantage of whatever starter sets, etc are on offer.

Oh, and while I’m discussing ground rules, I should say that Hawk Wargames (who make DzC) kindly supplied the review copy (thanks Hawk!). I don’t think that’s going to make a jot of difference to the review, I just thought I’d say in case you were wondering.

The Ante for Dropzone Commander

This is the easiest of all the calculations here. It’s £83.

Hawk sell 3 levels of starter set for each of the 4 factions. What you need to get going is the rulebook (£15) plus any one of the smallest starter sets (£68). That gives you the full rules, all four army lists plus the faction specific card deck and just over 500 points of models. This will be a very small game, to be sure, but it’s a game. 500 points is the smallest game they define in their sizes of battle.

It’s worth mentioning that they also have a set of free pdfs of buildings for you to print out and make into a city to fight over. Always helps to have a battlefield.

Dropzone Commander is a 10mm scale battle game where the eponymous dropships cart your battlegroups about a tabletop, depositing them where they can rush in to seize objectives and suchlike. Well, that’s what I read. I’ve not played it yet. Either way, it’s obviously not a 32mm skirmish game with half a dozen models a side, so comparing it to them is nonsense.

DreadBall is just £49.99, so does that make DzC expensive? Again, I’d say that it’s not a reasonable comparison. DB is a board game, not a tabletop battle game.

I think we should compare Dropzone to 40K and Epic from GW as they’re both well known SF battle games – one in a larger scale and one smaller.

Spartan have recently put out Planetfall as their 10mm bit of Firestorm Invasion and it would make a very good comparator. That’s a 10mm SF mass battle game too. Let’s start with that. 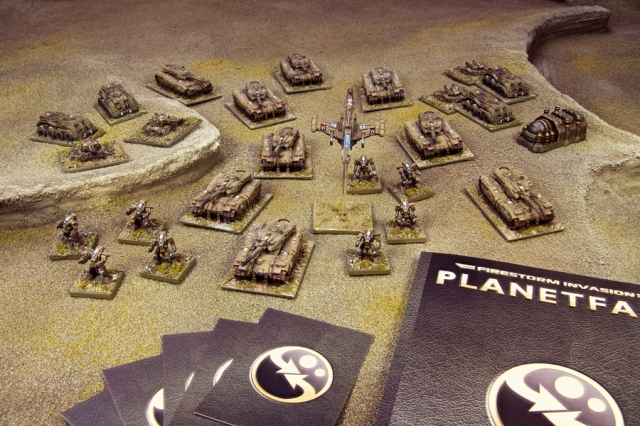 This is fairly new, so there isn’t a lot out for it yet. However, they do sell starter sets that include a small force which is described in the rules as being tailored for their smallest size battles, very much as the DzC ones are. These include a bunch of models, a set of rules and the cards you need for the force. They cost £45.

It is worth noting that according to the Studio Sparta site, Planetfall is currently being sold at “very special introductory prices”, and so presumably £45 is not their “real” price. Still, it’s a lot less than DzC. 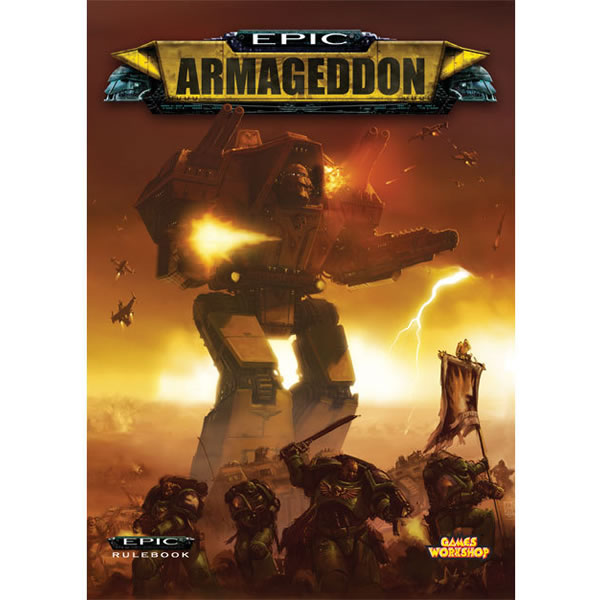 As we’ve been talking about physical rule books so far, it seems only fair to keep that going with Epic. The rules then, are £35 on their own. They are available as a free pdf though (as is Planetfall), but that’s not an even comparison.

The Space Marine models to play one of the sides in the combined arms training mission (a very small game) would set you back £55.10 (with some models left over to build some more basic infantry units).

Exactly how big a battle you’re getting to play and whether it’s (a) representative of the game and (b) a fair comparison is hard to judge, though it’s probably enough to give you a flavour and will do for our purposes here. It is also true that the equivalent size (in points) of mass armies such as Imperial Guard or Orks will cost a lot more cash than this. Space Marines generally have nice, compact forces. On the other hand, DzC forces all cost the same to ante up on.

Well it’s a bigger scale and that makes a difference in some ways. However, for the basic principle of getting enough to make a start at a mass battle game I think the nominal scale of the figures is less of an issue than it might at first seem.

The obvious starting place for 40K is the Dark Vengeance boxed set. This comes with a mini rule book and two small armies for £61.50. Are they enough for a scrap? I think it’s enough to get a general idea of the game.

Unfortunately, that’s not all you need though. To match the other games I’ve talked about you’ll need the codex for your army which will be either £25 or £30 depending on which side you pick. This makes it £86.50 or £91.50 depending. That said, you’re getting both sides here, not just one, which makes the comparison fuzzier.

Obviously you could choose all sorts of other things to compare DzC to. In historical games, DBA and a 15mm army (the most popular scale) would cost a lot less, but a Warhammer Ancients or Hail Caesar army and rules would probably be more expensive. Partly that’s because they are usually 28mm scale games, but it’s also that they field big regiments. Anything modern enough to have vehicles starts getting expensive for that reason. Flames of War, for example, has a £35 rulebook. You can get an infantry company for the same sort of price, but if you’re buying a combined arms army you could triple that.

One thing I haven’t mentioned is the quality involved. A Lada and a Ferrari are both cars. Ferraris seem very expensive when compared to Ladas if you ignore everything except the actual price tag. Here we enter the muddy realm of personal preference. What I think we can perhaps agree on is that the whole presentation of DzC (and all of the Hawk Wargames stuff) says that they want to position themselves at the high quality end of the market. You don’t go to them to buy a mixed bag of discount toy soldiers. They are claiming quality and naturally have a price tag to match.

Their price tag seems to me to be about on par with GW, which seems to me to make sense when you look at the quality and detail of their offerings. They are more costly than  Planetfall, and even if that bounces up in cost when the offer disappears I suspect they will remain cheaper than DzC. However, I think they look like they should be. Their whole presentation is not on a par, and whilst I’m sure it will be popular it is not trying to aim for quite the same niche. What I seem to be talking myself round to is that Hawk seem to have looked at the market and decided that they can sit next to GW on quality and therefore charge the same sort of price.

Having said that, I think that GW is actually more expensive than DzC will be in the medium and long term. This is especially true of 40K which has a very heavily discounted starter set. The prices you’ll be paying to build up those starter armies will not change much with Dropzone, but will jump up sharply with 40K.

So do I think that Dropzone Commander is expensive for what you get?

No, not really. It’s a lump of money to drop in one go, but not especially out of the ordinary for starting a new game.

This entry was posted in Random Thoughts, Review. Bookmark the permalink.

52 Responses to Dropzone Commander Review: Is It Expensive?