This is a heads up for what I’m currently writing. If you’re interested in DZ you might want to subscribe (over there, on the right) so you get an email when the new post goes up. 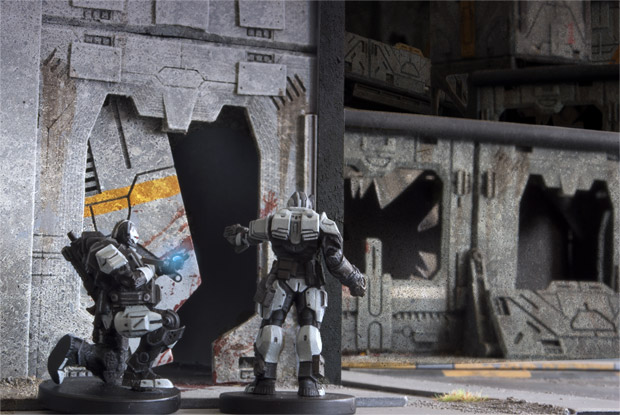 Firstly, I’m almost done with the Alpha. It’s ended up as a little scenario you can play, and it’s been a blast developing it. When I say a blast, what I mean is that I keep adding explosives into it, and I have to say that I’m especially pleased with the cinematic way they now work. High point of yesterday’s games was the mad antics of an Enforcer Assault trooper.

There he goes, charging into a Stage 3 – he injures him, but before he can give the killing blow they’re joined by the Stage 3’s mate. Feeling a little outnumbered and without support, the Assault trooper dodges out of combat, picks up a grenade that had been dropped earlier and lobs in straight back into the fight he’s just escaped from. The resulting explosion kills the injured foe, injures the second and blasts him out of cover and into the open where he is promptly shot by the Enforcer’s mate from a distant rooftop. The Assault trooper himself is entirely too close to the explosion and is blasted backwards, but is saved by his robust armour. A couple of turns later the Assault trooper is making his way back to the Enforcer position when he picks up another item only to find that it’s been booby trapped. Again this blasts him into the next square, and again his armour saves him.

Anyway, those rules will be up towards the end of this week, so there’s that to look forward to. You get to play with grenades too 😉

Secondly, I’m going to start posting up a series of design theory articles for Deadzone, here on Quirkworthy. The Kickstarter should have some game play videos up soon, and these are quite broad, especially the first one. I anticipate more of the lack of understanding I’m already finding because I’ve done some odd, or possibly unique things with the rules, and without you being told you’ve got no reference for them. It would perhaps be easier if I could just mind-meld with you all, but there would be side-effects.

The articles are both a chance for me to explain the thinking behind the rules and your chance to ask questions. It’s my way of trying to get everyone on the same page. By doing a series rather than just one I can hopefully keep a bit of a theme in each post’s comments so that we can all find things a bit more easily. The first one will go up tomorrow.

All of these will be linked from the main Deadzone page in the top bar, so if you want to bookmark a link that’s probably the easiest option.