Following on from yesterday, here’s a look at the first of my Darkhammer goodies. I’ve started with the same one they started with: the mounted Undead Samurai in the middle of the picture below. Oh, and before we get started, I bought this direct from Darkhammer themselves via their online store. All worked fine, though you should note that they (like Figone) only post every so often. It does say this on the site, but just in case you hadn’t spotted it and wonder where your models have got to…

Before we examine the model itself, it’s important to look at how it’s packed. After all, it’s got a long way to travel to get to me and I want it to arrive intact. As you can see, it’s a bit like the old party game pass the parcel.

On the outside is an illustrated wrap showing a moody photo of the bony fellow himself. Slide this off and you have a plain brown wrap that seals the top of a heavy tray. Inside this tray is a bubble wrap bag, and inside this bag is second bubble wrap bag. Inside this are the various components of the model itself – inside ziplock bags. So I’d say that was pretty well protected. 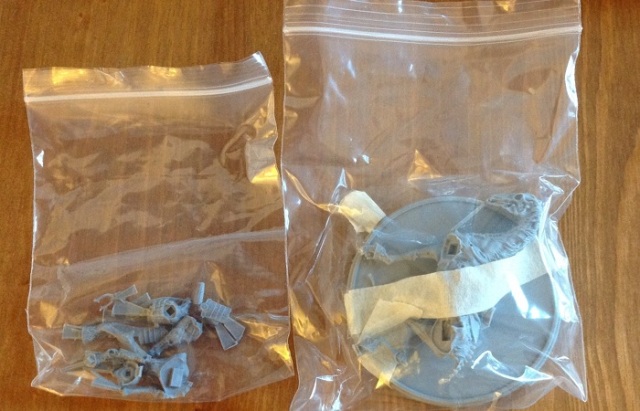 And here they are. Note that the main horse body was taped to the base. On the flip side were the yari and sashimono, also taped to the base for safety. I’m not sure if this was cunning forethought or lucky happenstance, but the yari was slightly too long to be entirely protected by the width of the base – but the pouring tag for the base gave just enough room for the whole length to be firmly taped to the underside. A nifty way to get finely cast pieces across the planet.

Dobbin isn’t feeling well. Not at all. A faithful old warhorse he may be, but this undead lark is playing merry hell with his shiny coat. I’ve places the two separate legs into position here (just slipped in, not glued) so you can see the general shape and the fit. The rider’s bum and upper legs are moulded onto the saddle. His lower legs, torso and so on are separate. This gives him a solid seat in the saddle where he needs it, and room between his lower legs and Dobbin’s flanks where he needs that. Much more convincing. If the animated dead can be convincing.

The horse is well rotted and well detailed with various bones sticking out from his mouldering coat and exposed muscles. He’s not fully skeletal, nor does he look fresh enough to call a zombie nag. He’s really a skeleton with a few stringy bits left attached. Don’t worry, the crows will have them polished off soon enough.

A close inspection of this picture will reveal the only broken piece in the whole assembly – the last couple of vertebrae in the tail. As he’s dead, I don’t really see this as an issue. I could stick the bit back, ignore it or add some hair to the tail. Hair often survives reasonably well on bodies, and he has a bit of a mane left so it wouldn’t look out of place. Either way, nothing to worry about. 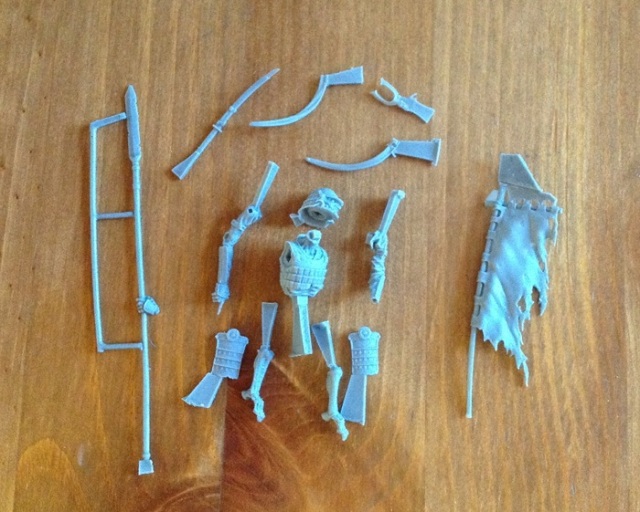 The rider himself is a fully armoured samurai. His lower legs have rotted to bone as have his arms, but his face is hidden behind his menpo (demon mask), so you don’t see the skull. There’s no mistaking his current state of health though.

The sculpting is gorgeous and the level and type of detail reminds me most strongly of the old Confrontation undead models like Cerberus or their own Scavenger skeletal cavalry. I’ll have to dig some out and see how they look side by side and, if you’re very good, I might take some photos so you can see what I mean 😉

Casting is clean throughout with sharp detail (and plenty of it). There are slight mould lines and some casting blocks to remove, all of which is fairly normal for resin models. Zero bubbles or miscasts as far as I can see. I don’t see anything unusual in the amount of cleaning to be done here.

I’ve not tried to build it properly so I can’t comment on all the fittings. However, the few bits I have put together (like Dobbin’s legs) fitted very well.

Overall, I think this is a great model. Prices depend on whether you pay the full whack or manage to snaffle one of Darkhammer’s periodic deals. Personally, I’m happy with what I paid and have even ordered some more models (including some duplicates to tinker with) since these arrived. I suppose I can’t really say fairer than that.