The last of the three models I got from Darkhammer is the biggest and baddest: the Bloodlust Tyrant. Don’t let the fact that he abbreviates to BLT make you think he’s a dainty morsel: he’s a monster.

Yes, it’s more demonic undead naughtiness from Asia. Again, I’ve no idea whether this represents a specific mythical creature or whether it’s a more generic expression of the sculptor’s nightmares. Either way, it’s a great looking piece.

As with the Samurai and Monk, it comes well protected in a pass-the-parcel set of layers. Straight out of the bag it looks like this:

I’ve not cleaned, straightened or otherwise fixed anything.

As you can see, there’s quite a lot of parts in this box. Annoyingly I just realised that I haven’t added a scale to this, so you’ll have to use the parts of undead humans he’s decorated with as a guide (there’s three of them at the bottom of the pic above). He’s not small though.

As there is so much detail of armour, weapons, corpses and rotten, mangy, fur and flesh texture on this chap I’ve left these pictures a bit bigger than usual so you can click and enbiggen 🙂

As before, these remind me of some of the Rackham models in terms of detail and unpleasantness. And that’s a good thing. Rackham wasn’t perfect all the time, but it came  close more often than most. I really must dig out the Uraken Ogres to see how they’d sit alongside these chaps. They aren’t undead, but still… 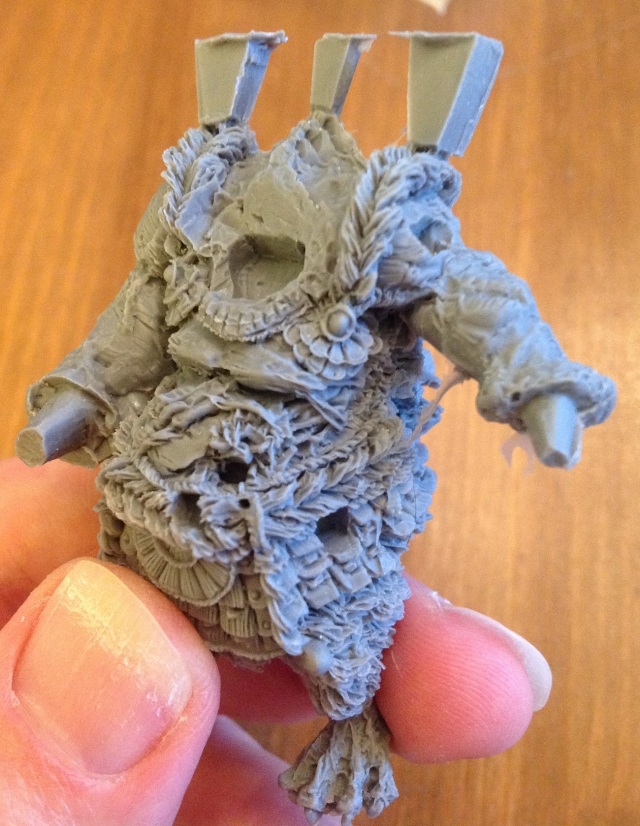 The main body from a slight angle. Lots to play with here.

The next two are me holding the two main body parts together. This isn’t glued so the join is OK, but not perfect. That’s possibly just the way I’m holding them. Again, no shortage of detail to drybrush, wash or otherwise pick out.

There are a couple of slight whitening scuff marks on the right hand side of the model. In person it looks like it’s simply discolouration rather than anything that needs repairing, so nothing to panic about. In any case, an undead demon thing is already going to be covered in manky bits, so a bit of damage would not be at all out of place.

I could go on telling you it’s pretty and showing you yet more pics, but I think you get the idea…

As with the others, it’s cast in a grey resin that holds detail nicely and doesn’t seem too fragile. However, as with anything made of resin the thinner parts may not hold up to tabletop handling (depending on who you play with). Personally I’m careful with models so I’d be happy to use them. If I was really bothered then I’d replace the spear shafts with brass rod and drill out the sculpted head and butt so I could keep the fancy work.

All the bits I’ve dry fitted work well and it looks to be a well thought out kit. There aren’t any instructions, but with the pictures to hand you can see where everything goes easily enough. All the smaller pieces either locate in specific holes or have specifically shaped shallows sculpted for them to nestle in.

This is a final picture that I’ve pinched from the Darkhammer site of the assembled sculpt (I assume from the mixed materials that this is the master). I do think he looks impressive. More pics on their site.

Overall I think that this is my favourite of the three models I’ve got from Darkhammer so far. I find him refreshingly different from the normal fantasy ranges you see everywhere. Add technical skill and a striking character and you have a winner in my view. Highly recommended.

When I first saw the model I immediately decided I wanted it, but it took a little while to think of an excuse. I try not to buy things I don’t have even a blue sky project for. if I can make these guys work as I have in mind they will be very impressive on the table.

Darkhammer have made another model since the Tyrant, Monk and Samurai were done and I’ve ordered that too. Just waiting for him to arrive now 🙂