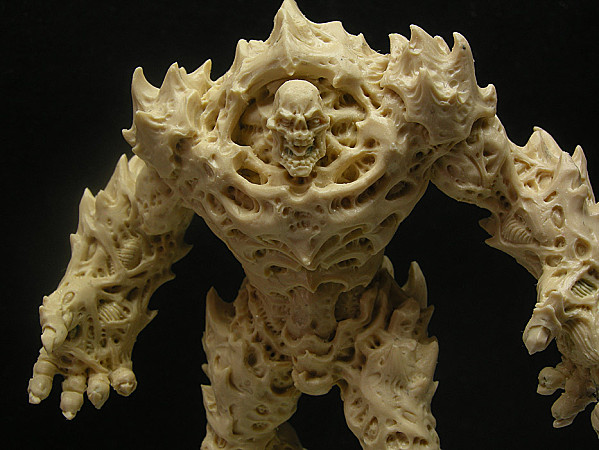 Probably the most common question I’m asked about Deadzone are about linked Fights. This has been called several things like daisy chain combats, infinite fights and so on, and according to some folk it’s the most over-powerful thing going. Opinions differ though, and I’m one of those who hasn’t found it a problem. There are some subtleties in this area of the rules, so to make sure we’re all on the same page I thought I’d go through the process in detail and then discuss the issues that have been raised.

I’ll start with the basics.

A model moves into a cube containing one or more enemies. This requires them to Fight one of those enemies immediately, as part of that Move action¹.

If the attacker doubles the target model then they can make either a free Fight action (if there are still enemy models in that cube) or a free Move action (if he’s already killed them all). If he takes the free Move and there is an enemy model in an adjacent cube then he can Move in and will have to Fight that model too – again, as part of that (free in this case) Move action.

Assuming that the attacking model doubles every single attack they will keep getting free actions. However, remember that a free action cannot trigger another free action of the same type, so no free Fight – free Fight. Note also that the Fight included as part of a Move action is not a separate free action – it’s an intrinsic part of the Move action.

This sequence can be combined with Move cards and extra actions from Command tests to give a melee model a very long range (probably most of the tabletop at the extreme end). At least, it can in theory.

Getting this to work requires everything to go right for the attacker. A single break in this chain and the whole thing stops dead. Most stages require a dice roll to work, and some require use of a limited resource. All require your opponent to help you (and why would they do that?) or be unaware of the tactic.

For the long range version you need a model that can use a Command action, is close enough to the attacking model, and doesn’t need to use their action(s) for anything else (like staying alive). You also need to have a token left in your Command Pool. These tokens are in very limited supply, so if you use one for something then it’d better be worthwhile. If all this is true then you still need to make the command test. It’s not that hard to do, but it is a dice roll and we all know how they can be 😉

Ideally you want a Move card in your hand as well.

The long version will involve at least 2 actions that the other side can potentially Overwatch against. If the moving model is Pinned, Suppressed, Injured or Killed in either of these actions, then the “infinite Fight” is over before it starts.

Even in a normal Turn, without the benefit of Command actions or extra Move cards, there are many things that have to go right for an attacker to pull off anything spectacular. To start with he has to double his first opponent in the Fight. This is likely in some combinations and less so in others. It’s never guaranteed.

In order to cascade this into a series of Fights against multiple enemies you have to get the right results every time, plus the enemy have to be positioned in the right way. For example, let’s say we have an attacking model called Attacker, and a set of 2 target models in 2 different, adjacent cubes called Targets A and B.

The Attacker takes a Move action and moves into the cube containing Target A. As part of this Move, he must now Fight Target A. They roll for the combat and the following results are possible:

Things are different if there are 2 or 3 enemy models in a cube, but I’m sure you get the general idea.

The limit on repeating free actions is a major restriction here. If the enemy aren’t stacked up in exactly the right way, and you don’t roll exactly the right results every time, then your “infinite” Fights won’t last long. This limit on sequencing can be forgotten in the heat of battle and may account for this seeming to be more dangerous than it actually is.

Of course, if your enemy knows that this is possible they can try to either avoid the potential chain by positioning their models carefully, or use it to their advantage to lay a trap². Protect some models and leave others out as bait to get the enemy to go where you want them to. Into the sights of overwatching heavy weapons would be a preference for me. And for those who suggest that the attack simply suppresses the overwatchers first, I agree: that would be a grand plan. However, it assumes that you can see them. If an attack has to move into an enemy position (as melee assaults tend to) then it is likely that at least some of the overwatchers can be positioned so that they are not visible from the enemy lines, where the supporting models are. They will come into view only when the attacking model has advanced.

This is a nasty trick that experienced players can use to flatten novices. It’s also something that a lucky player can pull off against an unwary or careless opponent. It is, in my view, a perfectly reasonable tactic to attempt, but that view has a caveat: both players need to know it’s possible.

It’s not much fun losing to a trick you didn’t know was there, whether it’s this trick or any of the others. If, on the other hand, it’s a trick you know about, could employ yourself, are aware of possible counters and have just either been careless, taken a risk or been outfoxed, then this is all part of the contest of wits. I have spent quite a bit of time trying to layer in a series of different tactics and counter-tactics into Deadzone, some of which are more obvious than others. Some only work with certain factions or with certain models. As normal in any game, many of these tactics are particularly nasty the first time you encounter them, and this seems fair enough to me. If we play and I lose then I learn, rethink and come back with a plan to counter you. It may take a few goes for me to come up with an equally nasty surprise, and then the circle starts again, but reversed. This tactical equivalent of an arms race seems to me to be one of the more interesting things about gaming. If it was the same every time it’d be dull.

Pulling this off against an opponent that’s aware of the possibilities should be seen as an achievement, just as any other plan that bears fruit. It is hard to do though. Scarletsquig asked why I didn’t just remove this possibility if it was so rare. That’s simple. It’s all about balancing the relative usefulness of melee and ranged troops. There are many very nasty shooting tricks (aim, weak spot, clear shot, etc) and these can all be done at no risk to the Shooting model. I’ve seen more battles won by overwhelming shooting than I have overwhelming melee power. Both are possible, and both can be devastating if done right (and with a bit of luck). As the melee beasties have got to get past all that shooting stuff to do anything at all they need a nasty trick of their own if they get up close. Even if it’s hard to get right, even if it is rare, it’s something that makes an opponent wary. And when we’re talking about huge, plague-ridden monstrosities, wary is what you should be.

1: This last bit is very important: the Fight caused by moving into a cube is part of that Move action, not a separate Fight action (free or otherwise). In the initial print run of the rulebook the relevant wording was “… it will Fight for free as part of that action.” This was confusing as “for free” didn’t mean it was a free action, just that it happened as a bonus without costing you another action. My bad. The second print run of the book fixed some typos and included some minor corrections (see the FAQ), one of which was to change this line to “… it will Fight as part of that action“. The rule hasn’t changed, it’s just been made less confusing. Again, the critical bit here is that this Fight is part of the Move action.

2: Positioning is a key aspect of the game, and there is rarely an ideal solution. The game is also designed to generally work better for a fluid set of positions. Static defences are weak in most DZ situations – keep moving! The board is a small area and it can be hard to get away from threats with long reaches. But this is part of the point. The area is intentionally cramped and claustrophobic to better represent the nature of close quarter battle.

This entry was posted in Deadzone, FAQ. Bookmark the permalink.