One thing about the good old days is that they weren’t all that good. At least, not if you’re talking about variety of stuff you could buy off the shelf, ready-made. These days there are many, many times more of everything available: more miniatures, more scenery, more paints, more rules, more tutorials – you name it, there’s more choice now.

However, back in those long-gone days or yore, when we hadn’t got more than a few card buildings out of old White Dwarfs to stick on the table, we had to make sure own. And, when we did, we used all manner of rubbish: insides of old radios, toilet roll holders, Pringles tubes (once they’d been invented), toothpicks, film cases, and so on. Whatever you could find that had an interesting shape.

While I’m intending to use slightly more robust materials than cereal packets for my own core construction, I thought it would be fun to go back to that nostalgic ransacking to see if I could find any interesting stuff for my Old Skool Skirmish boards.

The first victim was an old router I found. It’s not worth anything on eBay, and it’s outdated so it’s not much use elsewhere. So out came the toolkit…

The dirty white outer case popped off easily enough. Can’t see a use for that. The inner box has perforated sides that look like they should have some use, so I wanted to get into that. Fiddly stuff, but it came apart in the end.

The PCB is mostly rubbish. I’ve seen them used on scenery before, and they look terrible. Just like giant PCBs, which is silly. The trick is to find something that’s got an interesting shape you wouldn’t be able to easily make, but which you can disguise in terms of scale and provenance. 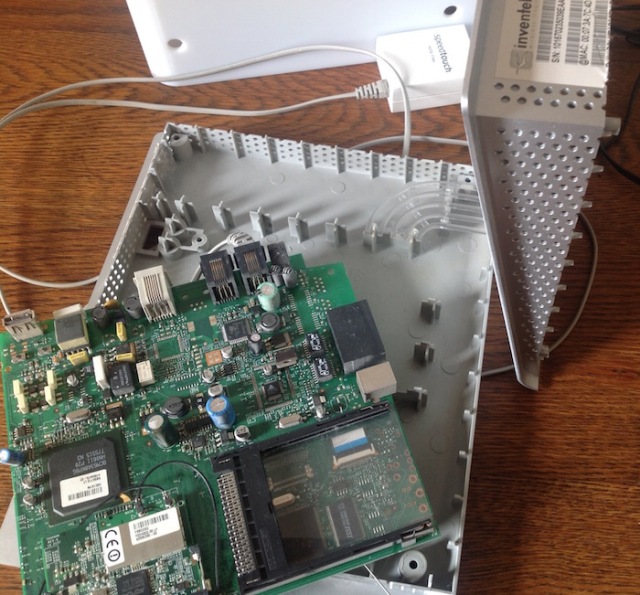 I’m liking the look of this clear plastic curvy pseudo piping. Not sure what it’s actually doing in here, though I can see it as piping on a tabletop.

Then there’s the sides of the inner case, with their perforations. It’s nice and robust, so could be a wall of some sort. Might suit some part of my modernist Plaza.

I’ve not quite finished hacking off the goodies and dumping the rubbish – I ran out of time before I had to write this. You can see where I’m going though. And this is fun too. You never know what you’re going to find when you crack something open!

Do you game over scratch built terrain made from found items, or are you a buy off the shelf kind of gamer?