I’ve been silent of late. Lots has been happening, some of it good, some bad. On the whole I think that it’s better not to say anything than to start ranting and railing, so I’ve kept my counsel. Still, as Grzegorz reminded me this morning, you guys deserve to know a bit more about what’s going on. So, here’s a quick round-up of what’s happening here.

As always, there’s a bunch of things rumbling around in the background. Something like 6 possible board game projects, among other things. We’ll see how many of those pan out. More on them as they bubble up to the surface.

The rest falls into 3 main categories. Starting with the simplest…

This competition is now closed.

I am currently in dispute with Mantic 😦

I don’t want to discuss details which is why I’ve not mentioned anything publicly till now. I had hoped to have it sorted months ago. Unfortunately, it’s taking a very long time, and until this is resolved I’m not going to be doing any more work for them on any project, new or old.

My apologies to those of you who feel caught in this crossfire. I’d rather not be here either.

On a much happier note, you may have seen me with the Mythic Battles/Monolith guys in some of the reports on the recent Essen Spiel. If you didn’t, then here’s a random picture of me playing Mythic Battles: Pantheon on a fancy 3D demo board, with some Conan stuff in the background. 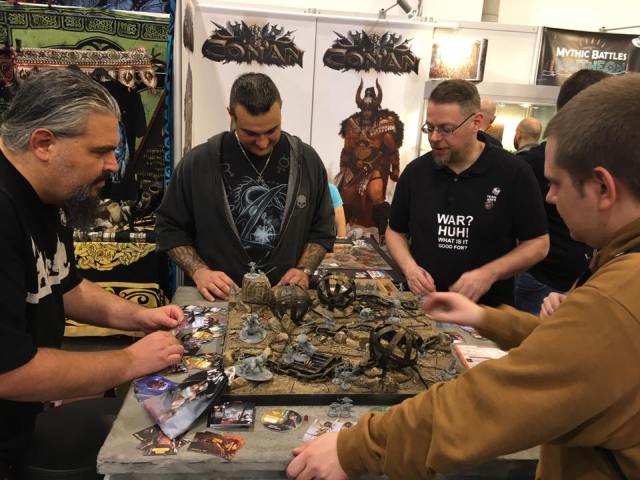 Essen was an experience, and no mistake. The Spiel is vast, and sprawls over 4 public days, plus a day for professionals, and more of set-up. Something of a marathon. All good fun though, and their upcoming game (Mythic Battles: Pantheon) was very well received by both public and professionals, which always makes things easier. It goes live on Kickstarter on the 1st of Nov.

This project is a bit of a departure for me as my initial work for them is more like being back as a magazine editor than as a game designer. Fun though. A sort of blast-from-the past.

I’ll explain more over the next few days. For now, just let me point you at their Facebook page, and tell you that I should now be addressed as the Voice of Olympus 🙂

Naturally, I’ve got more on my mind than this. For example, some jolly-looking Kickstarters I’m pledging for, plus the sadly lost opportunity of Lost Patrol. I’ll have to come back to them.