Posted on October 5, 2011 by Quirkworthy

I thought that the Derby show this year was the best it’s been for some time. It had loads of interesting games to look at as well as a huge and varied selection of traders. I know a fair amount about gaming, but still managed to stumble on some new (to me) and really cool companies and products to expand my gaming horizons with. I’ll be looking at a couple of them and reviewing samples of their fine wares as soon as I can get them all written up. For the moment I’ll just show you the pile of swag I came back with.

Now, on with the games! Being overexcited I forgot to take notes, so the details of what’s going on may be fuzzy, but hopefully the pictures are sharp (see what I did there?) 🙂

It’s an English convention, so there’s an English Civil War game (or three). There are also other periods such as this particularly pretty battle of Sedgemoor from the Monmouth Rebellion. It developed over two days and the fog (I think that’s what it was) in the background had gone on day 2. One army is deployed behind it and the other is marching into position from the bottom left corner of the picture above, and the top right of the one below. It was nice to see them deploy from march column as it’s something you see so rarely in games.

This is what they’re defending: a beautifully modelled town with a camp of scruffy soldiers on the outside (their tents are nice and clean though).

On a completely different scale of both table and model we had Baccus demoing a 6mm game. ACW I believe. Unfortunately he is conducting the cardinal sin of having rubbish obscuring an otherwise nice display.

And to show that it wasn’t all historical, here’s a fantasy skirmish demo. Their tagline made me smile 🙂

It wouldn’t be a convention without Lutzen in one form or other. This is the 30YW version, all ready to kick off.

WWII was being re-fought in the open desert…

…and the clutter of NW Europe. This was a particularly nice table. Sadly a lot of my pictures came out blurry.

I did, however, stop trembling for this one. Very evocative.

Good grief! This post is going to be vast. Still loads more games to go. This was an enormous Celts vs Roman game of Hail Caesar by the Warlord Games chaps. 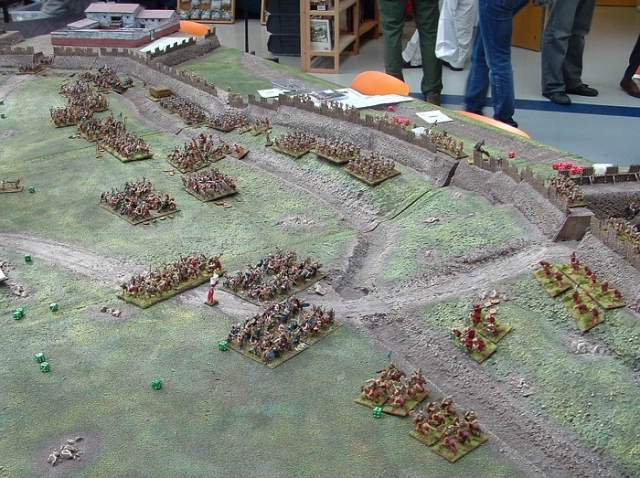 Warlord were also showcasing their Bolt Action WWII range with the complete opposite size of game. 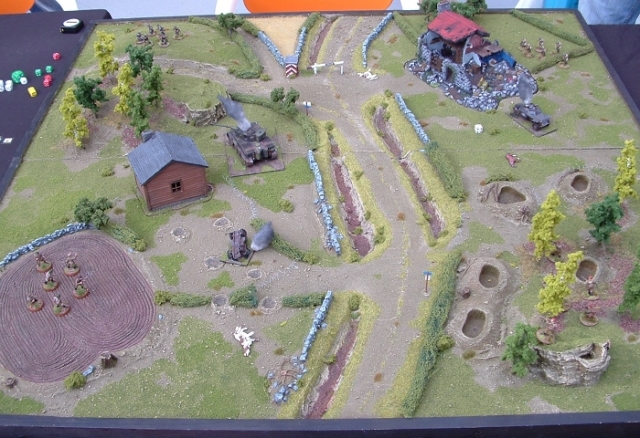 Lest you think that SF was completely abandoned, here is a futuristic scrap. These chaps made all the models themselves in 3D and then had them 3D printed. Sounds like it’s a bit pricy at the moment, but it’s the coming thing. Give it a decade…

Aren’t you a bit small for a stormtrooper? More 6mm battles. I really liked the look of this game, in part because the units themselves looked so good. No tiny regiments of 5 models here…

…as you can see below. I do like the tiny model scales for that bird’s eye view of battle and the sense of masses of troops.

And here is another vast 6mm battle, this time I think it’s Towton. Now that looks like a real battle! Vast units.

Enough of the 6mm stuff. I know it’s not everyone’s cup of tea (though you can’t deny the grand sweep of battle it allows). There were more games there, and even ones I took decent photos of, but I think you get the idea. Loads of stuff going on. Actually, before I finish, there was one last game that particularly caught my eye as innovative:

I think this was the Society of Ancients being entertainingly crazy again (they do it so well). The game centred on a Carthaginian elephant, and the Roman velites that were attacking it circled round it. Looked fun, and reminded me of those games where you are all the crew of a WWII bomber and everything revolves around that as you do your mission.

So there you have it: games at Derby World Wargames 2011. There was lots more, and some will turn up with the reviews of their products, but before I go I have to show you one of my personal favourite bits. Ainsty have new pirate ships and they are lovely.

I left these ship photos bigger so you can see them up close.

This entry was posted in Events, Pirates, Tabletop gaming. Bookmark the permalink.