How To Clean Restic – Part 1

Posted on November 8, 2013 by Quirkworthy

Following on from yesterday, this is the first in a series about restic¹ and what I learn from my experiments with various means of cleaning up models made from it.

Before I start I’ve got some things that need covering, so you know where I’m coming from. If you have different experience or goals then you might want or get different results.

My aim here is not to tell you that restic is the best material ever, nor is it to say it’s the worst. I think those slots are already taken. Given that restic is a family of materials that is plainly going to be with us for some time I’m interested in learning how to deal with it. I’m sure that cannot be beyond the wit of man. Or even me, if I put my mind to it.

Speaking of me, what would I know? Well, despite not having  finished painting a whole model in the last decade, I have been messing about with toy soldiers for a very long time. I’ve also worked with a lot of professional sculptors, manufacturers and painters and have interviewed quite a few of them over the years to pick their brains for various articles or my own interest. Over recent weeks I’ve decided to spend some effort getting back into modelling and painting, so I’m a funny combination of  experience, knowledge and lack of practice. A veteran newbie, perhaps.

In the last fortnight I’ve prepped some non-restic models for this painting project. I’ve cleaned up an old GW Mordheim plastic, a new Perry War of the Roses plastic and a fiddly Rackham metal among others. This means that I have fresh experiences to compare with.

The restic models I’ll be using for these experiments are the latest batch of Mantic miniatures in the material. This is a slightly tweaked version of restic as Ronnie and the rest of the Mantic crew continue to refine the process. Most obviously, it’s a darker grey.

Now because I wrote Deadzone² I can occasionally do things like swan in and ask for some of the new and unreleased shiny toys to chop about. The models I nabbed were taken from the boxes in the warehouse that were waiting for the rest of the components to arrive so they could be packed and sent out to the Kickstarter backers. In other words, these weren’t samples cherry picked for quality, they were just the ones at the top of the first box we opened. It’s not all of the DZ models, but a fairly wide selection of the figures from several ranges.

So, where to start?

To keep things as simple as possible, I thought I’d pick a piece of sprue (some of the smaller pieces come on mini sprues). That, I reasoned, would be reasonably straight and smooth as a starting point and allow me to see the effects of my scraping and scrubbing without being distracted by whatever the model was actually trying to be. I also thought that I’d be best off picking the absolute worst bit of flash I could find as that would make my progress (or otherwise) most obvious. Happily these two coincided.

Oh, a word of warning. I’m going to leave these pictures very big so you can see everything really close up. That way you can really see what’s going on, warts and all. Remember though, that this is all way larger than real life.

So my first test subject is the worst case of flash I could find in over 200 pieces. Even this isn’t that terrible. 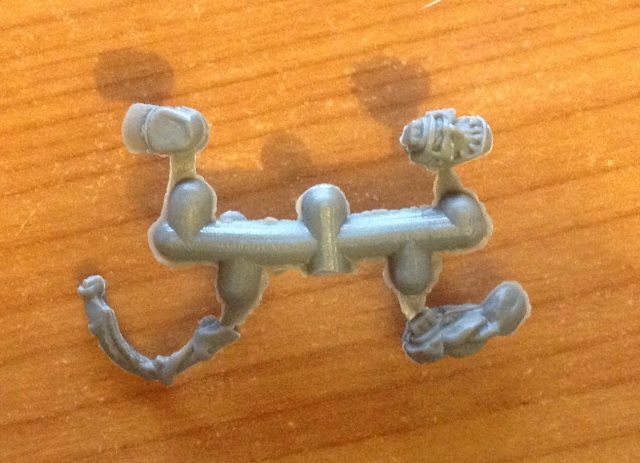 Strangely, and I’m not sure you can see this on the picture, the flash is worse on the sprue than the actual bits of model. Mind you, that’s just perfect for this test.

Before I show you what I did, just for reference, the body of the Orx that goes with this sprue (this is the pyro, by the way) had such subtle mould lines that it took me a minute to find them. Can you see the mould line here? 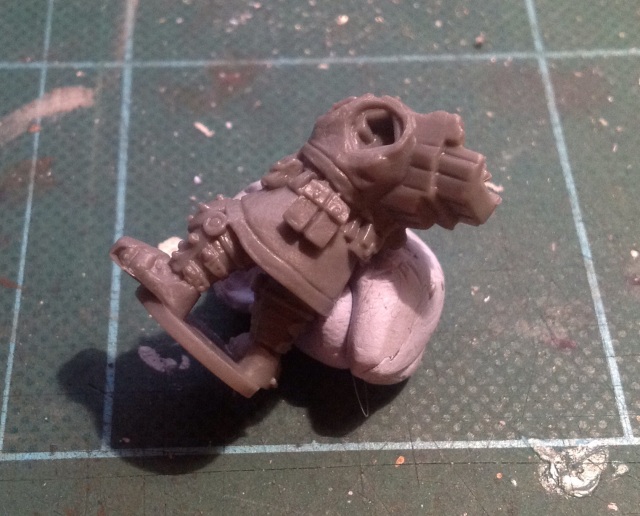 Eventually, with the help of raking light and several attempts I got a picture that shows it. I mean, it has to be there somewhere, right? Every model that comes out of a multi-part mould³ has mould lines.

Remember that this is larger than life size.

Spotted it? As you can see, it’s in the middle of the previous shot too. Most of the models I picked up were more like this than the sprue. I’ll show you some of the other ones later.

So, after asking for thoughts yesterday and trawling about the net looking for comments on the subject, I came up with a few generally received “facts” about cleaning restic.

So, I tried both knife and file. Taking one side of this sprue as a test, I cleaned one half with an old scalpel blade, first trimming away the bulk and then scraping with the edge. Then I filed the other side – no trimming back to start with, just filing away. I very quickly ended up with this:

Filing to the left of the central nub, scraping to the right. I thought I’d done a cleaner job than this, but then a great deal of magnification will make things look a bit ropey.

To make it a bit clearer I painted it. I tried ivory, but that wasn’t covering, so I switched to grey. The filed half is at the peaked cap end.

Now this looks perfect, even if I do say so myself. Whilst it was tempting to leave it like this, another angle makes my work look a bit less good.

So, what do I take from this? Quite a lot, actually.

Whether this is a change in restic recipe (possible) my deft and cunning skill (doubtful) or something entirely different I don’t know. However, in this experiment, with this restic, I have to say that I honestly cannot see a problem.

I have to confess that I’m a bit perplexed. After hearing the horror stories I was genuinely surprised when it went so smoothly. I was expecting far more drama (and some swearage).

What was most striking was that it felt like cleaning anything else. It’s somewhere in hardness between hard plastic and old metal (not the nasty and tool-breakingly hard pewter). It’s far nicer to work with than I expected.

I am sure that someone will decide that these pictures are an example of the disastrous flashing on Mantic models and run about with their hair on fire. It always happens when I try something like this. If they do, then they’re missing the point. The worst example of flash I could find in over 200 pieces took no more time to clean than the same piece would in metal or plastic and can be cleaned with the same tools.

Next time I’ll try it on a whole model and see how that works. It’s the same material so I don’t see why it would differ, but you never know 🙂

1: Restic, in case you don’t know, is a term for a form of what is commonly called “resin-plastic”. It has the advantage of being relatively inexpensive to tool and produce when compared to both traditional hard plastic and white metal, which is why Mantic, Fantasy Flight, Privateer Press and others have invested in it. Restic isn’t one thing but many – a family of plastics that share some properties of resin – at least that’s what I’ve been told. I’m currently researching the exact chemical description.

What I am sure of is that you can change the properties of restic by varying its exact chemical composition, primarily with regard to how hard/bendy you want the end result to be. This has a bearing on all manner of production issues, most important of which for figures is that a degree of “give” allows for undercuts. This, in turn, allows models to be made that either could not be made in hard plastic or would have to be made in many more pieces. So there are advantages other than cost.

2: In case you are new to this blog, I am a professional game designer and have written several games for Mantic. I suppose that means that I have a vested interest in the models being nice. Perhaps. I definitely do have an interest in models that I want to use being nice, which is rather more where I’m coming from here. Plus, like I said earlier, restic isn’t going away anytime soon and whether it’s Mantic or FFG making it I want to know how to deal with the stuff.

3: That’s pretty much all of them. If someone tells you that a model has no mould lines then the chances are that they haven’t looked hard enough. They can be subtle, but they can’t be absent. Not in a multi-part mould.

This entry was posted in Painting & Modelling. Bookmark the permalink.

42 Responses to How To Clean Restic – Part 1