Deadzone Redux, or DZR to its friends, is the current name for the updated and improved version of Deadzone.

I’ve been working on DZR for a few months now, and it’s still being tested so there’s not much in the way of detail I can tell you yet – best to wait till things are a bit more nailed down. However, it’s hard to keep the fun entirely under my hat, and I can say that we had a cracking game yesterday, as you can see from Ronnie’s happy face 🙂 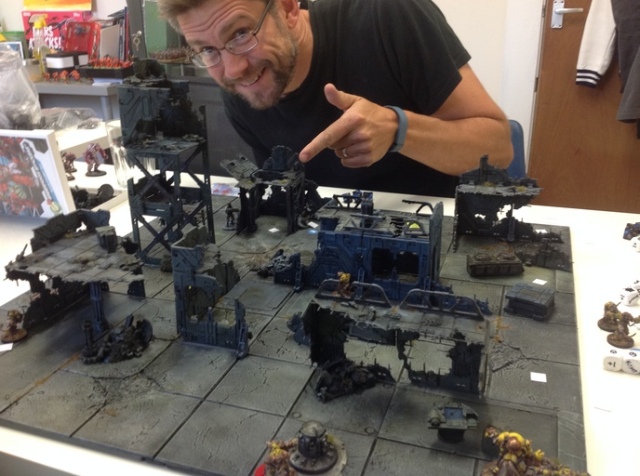 In case you’re wondering, he’s pointing out a Pathfinder that’s about to do something nasty to my sadly misunderstood rats…

All the old DZ fun is still there, with Ronnie making good use of the odd gaps blown in his newly-painted scenery to snipe at my rats from beyond the range of their weapons. Pesky humans. See if you can spot the nasty Pathfinder lurking in the distance (click for a bigger pic).

DZR is a faster, bloodier and easier to learn version the original, and I’m looking forward to our next stage of internal testing when we add all the armies into the mix (so far only been using parts of a few to test the core mechanics).

As an illustration of the sort of carnage we’re making, yesterday’s game ended with this fight between an injured rat and the last of the pathfinders (their boss). We’d both largely ignored the objective markers and concentrated on slaughtering the opposition, and slaughter we did. At the end of the game there were 2 models left on the table out of 12 that started. 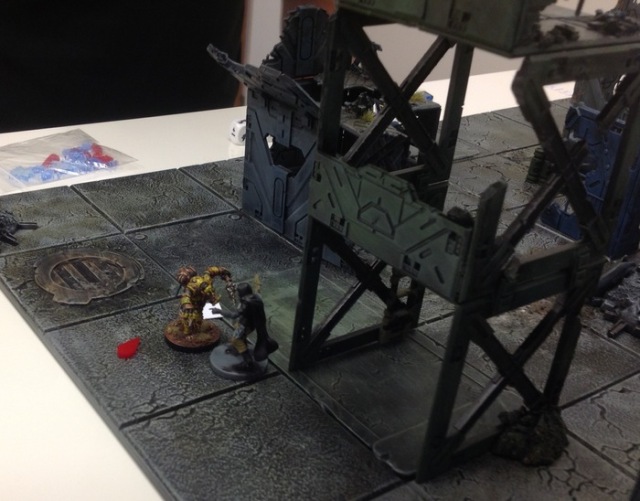 Stay tuned and subscribe, bookmark or whatever suits your reading style as I’ll be back with more as soon as Ronnie says I can spill some beans 🙂