Well, it’s that time of year again, and the Expo is on us. This weekend, thousands of gamers will converge on Birmingham’s NEC for 3 days of concentrated gaming goodness. I’m getting quite excited 🙂

I’ve been going to this show for years now, and every year it’s grown. This year is the first in the NEC, one of Britain’s largest exhibition centres, having outgrown the large hotel/conference centre it took over last year. The need was obvious – last time there was gaming in every nook and cranny of the hotel, not to mention the competitions in marquees in the grounds and the gaming in the halls and visitor’s rooms themselves. Even the food had been evicted to make way for more gaming, meaning that the car park was full of all varieties of food vans, a beer bus (below), and other routes to culinary satisfaction. Way better than the usual solitary burger van or greasy spoon you get at gaming shows though – an excellent solution. 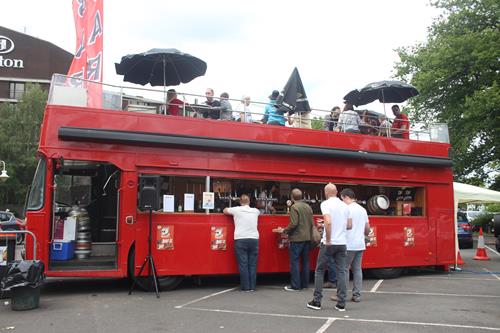 Anyway, I digress. It’s big. The biggest I know of in the UK. I certainly can’t think of anything nearly as big for board games or RPGs. Salute has the edge on it for figure gaming, but that’s only one day long so it reduces itself to a frantic shopping spree. UKGE is three days, which gives you the time to explore, to play things, to chat, to relax. There are also artists, LARPing, seminars, competitions, cosplayers, and more to see or join in; not to mention the daleks and stormtroopers to have your photos taken with. Like I said, it’s a big event and there’s loads going on. You won’t see it all.

If you’ve not been before and are at all interested in games, I’d recommend you try to pop along at some point this weekend. You can get a ticket on the day, it’s very family friendly, and it has a very high female/child count (for a game show) – almost as if gamers were part of the real world!

The main trade hall at the NEC is open from 11-5 on Friday, 9.30 to 5 on Saturday, and 9.30 to 4 on Sunday. Outside those times there are other things going on around there, mostly at the nearby Hilton Hotel (where the event was last year). This includes pick-up as well as bookable RPG games that seem to be played half the night. Last year I ended up playing Pathfinder, entirely without planning, just grabbed at the last minute (which I vaguely recall was after 11pm). It’s not hard to find yourself a game if you’re interested 🙂

This year I’m wandering about like the penguins, above. I’ve been on trade stands before, and next year I have possibly 3 different stands I might have to flit between, but this year I’m just drifting about, seeking things to amaze and amuse myself. That means that I get to play some of the many games on offer, and I expect there to be a great many to choose from. Ice Cool (above) is one I’m looking forward to trying my hand at, but there will be loads more – way more than I can fit in during a mere 3 days. Calling the main space the Trade Hall makes it sounds like a big shop, and there will doubtless be plenty to buy. However, there’s always a bewildering array of games to play as well, and hundreds of people who would just love to run you through a demonstration of their latest masterpiece. Some of these will be buyable on the day, but increasingly there are people previewing early copies of things that are set of Kickstarter or Indiegogo. A sign of the times.

All told, a great place for a gamer to lose themselves for a few days 🙂

This entry was posted in Events, UKGE and tagged Event, UKGE. Bookmark the permalink.